Austin Butler wife: the Elvis star has been dating model/Actress Kaia Gerber since December 2021. Take a look at their relationship timeline below.

Born Austin Robert Butler, Austin Butler is a well-known Actor from America. He began his career in the showbiz industry in 2005 and has worked in several movies and series.

Austin earned wider recognition after his role in The Carrie Diaries and The Shannara Chronicles.

During his stint in Hollywood, the Elvis star accumulated enormous fame and fortune. Owing to his fame, his personal life, especially his love life, has become the subject of public interest.

So, who is the handsome star’s love? Is he dating or married? Let’s find it out in today’s article, including details about his dad, mom, and siblings.

Austin Butler Wife: Is He Married To His Girlfriend, Kaia Gerber?

Austin Butler has been dating a model and Actress, Kaia Gerber, since December 2021.

Before Kaia, the Actor dated the singer/Actress Vanessa Hudgens from 2011 to 2020. On the other hand, Gerber broke up with her then-boyfriend, Jacob Elordin, in November 2021.

Soon after Kaia’s breakup news popped up, the gorgeous model was spotted with Austin Butler in December of the same year.

The smitten pair were spotted attending a yoga session together in Los Angelos, reported Daily Mail. Media continued to spot the lovebirds together often, sometimes during a cozy supermarket date and other times simply walking together.

Austin Butler and Kaia Gerber celebrated their first Valentine’s day in London. The adorable duo was pictured walking around the city.

Since then, they have attended many public ceremonies together. For instance, the adorable duo graced the red carpet for the 2022 Met Gala, and Kaia was there to support her beau as his film Elvis premiered at the 75th annual Cannes Film Festival.

As for Austin Butler’s child, he is yet to enter into parenthood.

Nonetheless, Austin Butler and Kaia Gerber’s union is still going strong. Although the news of their marriage has not been discussed, the lovebirds might be planning on it. We wish the pair everlasting love.

The Elvis star’s parents reportedly divorced when he was seven. Sadly, Butler’s mother died of Cancer in 2014.

The Once Upon A Time In Hollywood Actor revealed that his favorite childhood memories are watching SNL weekly with his mother.

The star added though he had crippling shyness, he would do anything to make his mom laugh. Any time you find me doing a funny/goofy voice or face, that’s for you, mom,” said Austin.

Moreover, Austin Butler has an elder sister, Ashley Butler, who was born in 1986. The star’s sibling worked as a background Actor with him on Ned’s Declassified School Survival Guide.

During his career spanning over seventeen years, the Carrie Diaries Actor amassed a hefty fortune. Austin Butler’s net worth is $4 million, reported Celebrity Net Worth.

His riches mainly consist of his earnings as a performer. According to ZipRecruiter, a person working as Actor earns $70K as an average annual salary.

Hopefully, Austin will continue to achieve more success in the coming days.

You Might Like: Why Was Al B. Sure In A Coma? What Happened To Him- Illness And Health Update

Amir Wilson parents Paul and Nagla Wilson, gave birth to him on 6th February 2004 in Shrewsbury, England. Many people seek to learn about his personal life and upbringing. Amir Ahmad Wilson is an English Actor who has portrayed numerous superhit characters like Will Parry, His Dark Materials, Tiuri in the Netflix series The Letter…

Yes, Hunter Doohan is Gay and has been married to his loving husband, Fielder Jewett. Check out more about hunter and Fielders’ relationship via this article. Hunter Doohan is an Actor and writer whose anticipation in the Wednesday, an American coming-of-age supernatural dark comedy television series, has activated the audiences’ attention.  The Actor appears in… 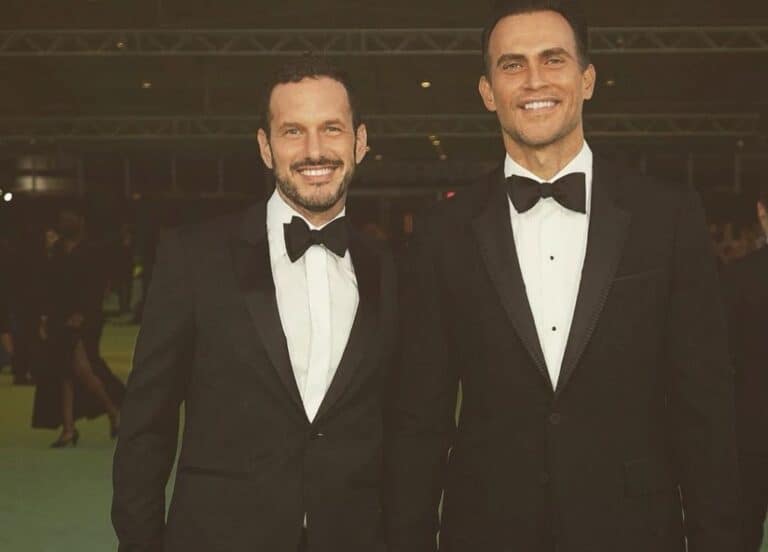 Yes, Cheyenne Jackson, an American singer and actor, is gay and happily married to his husband Jason Landau. Jackson has garnered a lot of fame over the years as an Actor and singer. His resume includes roles in Broadway musicals & stage productions, additional appearances in movies and television shows, concerts, and music albums. Similarly,…

Did Chase Stokes cheat on Maddie Cline? What was the reason behind their breakup? Get to know via this article. Chase Stokes and Maddie Cline are the stars of the Netflix series Outer Banks.  Before being involved in Outer Banks, Cline did many television shows and movies, and she was most known for Savannah Sunrise,…