Mark Anthony Luhrmann, famed by his stage name Baz Luhrmann is an established film director, producer, writer and Actor who holds a higher command in the Australian Entertainment Industry.

In addition to his direction and acting, Luhrmann is considered a contemporary example of an auteur with projects spanning film, television, opera, theatre, music and recording industries.

Currently, Baz rose to fame for the direction of his 2022 biographical musical Drama film following the life of rock and roll icon, singer, and Actor Elvis Presley.

Besides his professional life, his style and deep involvement in his work’s writing, directing, design, and musical components.

Commercially, Luhrmann is the most successful director, with four of his films in the top ten highest worldwide-grossing Australian films of all time.

Talking about his music career, he is famed for his Grammy-nominated soundtracks for Moulin Rouge! and The Great Gatsby, as well as his record label House of Iona, a co-venture with RCA Records.

Is Baz Luhrmann Gay Or Married To Catherine Martin?

Baz Luhrmann got married to Catherine Martin on January 26 1997.

His wife is the most awarded Australian in Oscar history. Catherine has won two Academy Awards for Moulin Rouge! in 2002 and another two for The Great Gatsby in 2014.

Moreover, Catherine is credited for her works alongside her husband, filmmaker Baz Luhrmann, including Romeo + Juliet, The Great Gatsby, and Moulin Rouge! , Australia, and Elvis.

For her spread in their December issue, Baz, her husband, photographed her alongside their children.

In 2013, Catherine was awarded a Glamour Magazine Woman of the Year.

Catherine and her husband have two children, a girl, Lillian Amanda Luhrmann, and their son, William Alexander Luhrmann.

His mother, Barbara, was a ballroom dance teacher and dress shop owner, whereas his Father, Leonard, ran a petrol station and a movie theatre.

The award-winning director received the nickname “Baz” at school, given to him because of his hairstyle, the name coming from the puppet character Basil Brush.

In 2016, Baz and his wife developed the Netflix television series The Get Down, which takes place in the 1970s South Bronx. In the series, his wife was an Executive producer.

According to Celebrity Networth, Baz Luhrmann is a well-acclaimed Australian director, screenwriter, producer, and former Actor with a net worth of $50 million as of 2023.

In July 2015, Baz and Catherine placed their Darlinghurst, Sydney, home on the market for $16 million to establish a more settled family life in New York City.

In 1982 using the money he had earned from film and television experience, he founded his own theatre Company, The Bond Theatre Company, with future friends and collaborators Nellee Hooper and Gabrielle Mason.

Baz and Catherine put the six-bedroom, five-bathroom property on the market for a shade under $20 million in March 2022.

In 2017, the award-winning director and his oscar winning wife paid $13.5 million for an impressive townhouse in New York City that dates to the 19th century.

Also read: Ignazio Boschetto Wife: Who Is He Married To? Kids And Family

Angelina Jolie is an American actress, producer, director, and humanitarian who has a net worth of $120 million.  She is viewed as one of the most powerful and influential people in the American entertainment industry. Meanwhile, she is the recipient of prestigious awards, including the Academy Award and three Golden Globe Awards. Apart from numerous… 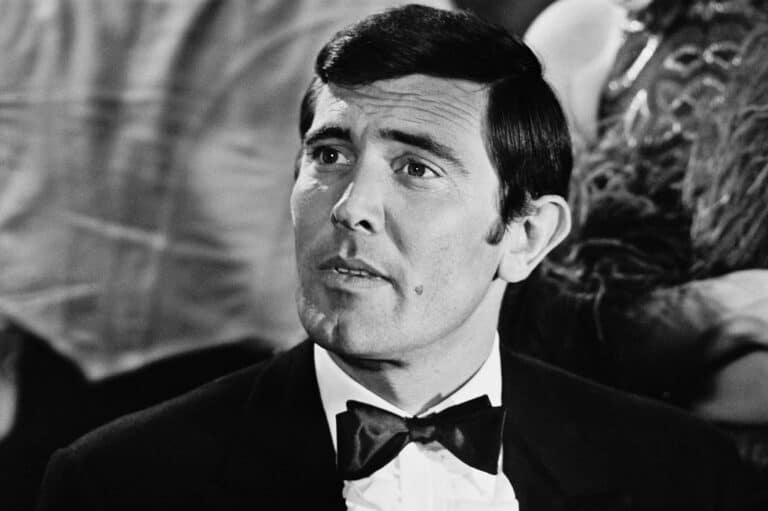 George Lazenby was dubbed by his co-star George Baker in his only appearance as James Bond. George Lazenby is an Australian actor and the second actor to portray British secret agent James Bond by playing the character in On Her Majesty’s Secret Service. However, he appeared in only one Bond film, making the shortest tenure among…

The late American actor, investor, advisor, and Money manager Wayne Rogers had a net worth of $75 million as of , . He was also known for the role of Captain Trapper. On April 7, 1933, Wayne Rogers was born in Birmingham, Alabama, to Lydia Eustis Rogers and William Wayne McMillan Rogers Jr. Furthermore, In 1960,…

Arnold Schwarzenegger death rumors are trending on the internet as a part of baseless information circulating over social media. He is alive and doing well even though he is aging gradually. The versatile personality with the talent of being Actor, film producer, businessman, retired professional bodybuilder, and politician has gained numerous honors, accolades, and a…

With the release of Lost Bullet 2, many audiences and fans are curious about Thibaut Evrard and his life details. Thibaut is an Actor From Germany who is known for The Transporter Refuelled (2015), Double vie (2019), and Borgia (2011). Lost Bullet 2 was released on 10th November 2022, a French action thriller film that…

Fred Tatien made his latest appearance in a Spanish-French rural horror thriller directed and written by Carlota Pereda. Piggy is based on Pereda’s short film of the same name, which won the Goya Award and the Forque Award for Best Short Film in 2019. The actor, Fred, was virtually unknown until he broke out in…