10 Best Twerkers In The World

Best Twerkers In The World!!

Well, it is a type of dance that involves seductive hip-shaking movements.

You can do it in different positions; a person can twerk by bending his/her knee, making it a squat pose; you can either twerk in cow pose, or you can lie on the ground and do the movements. 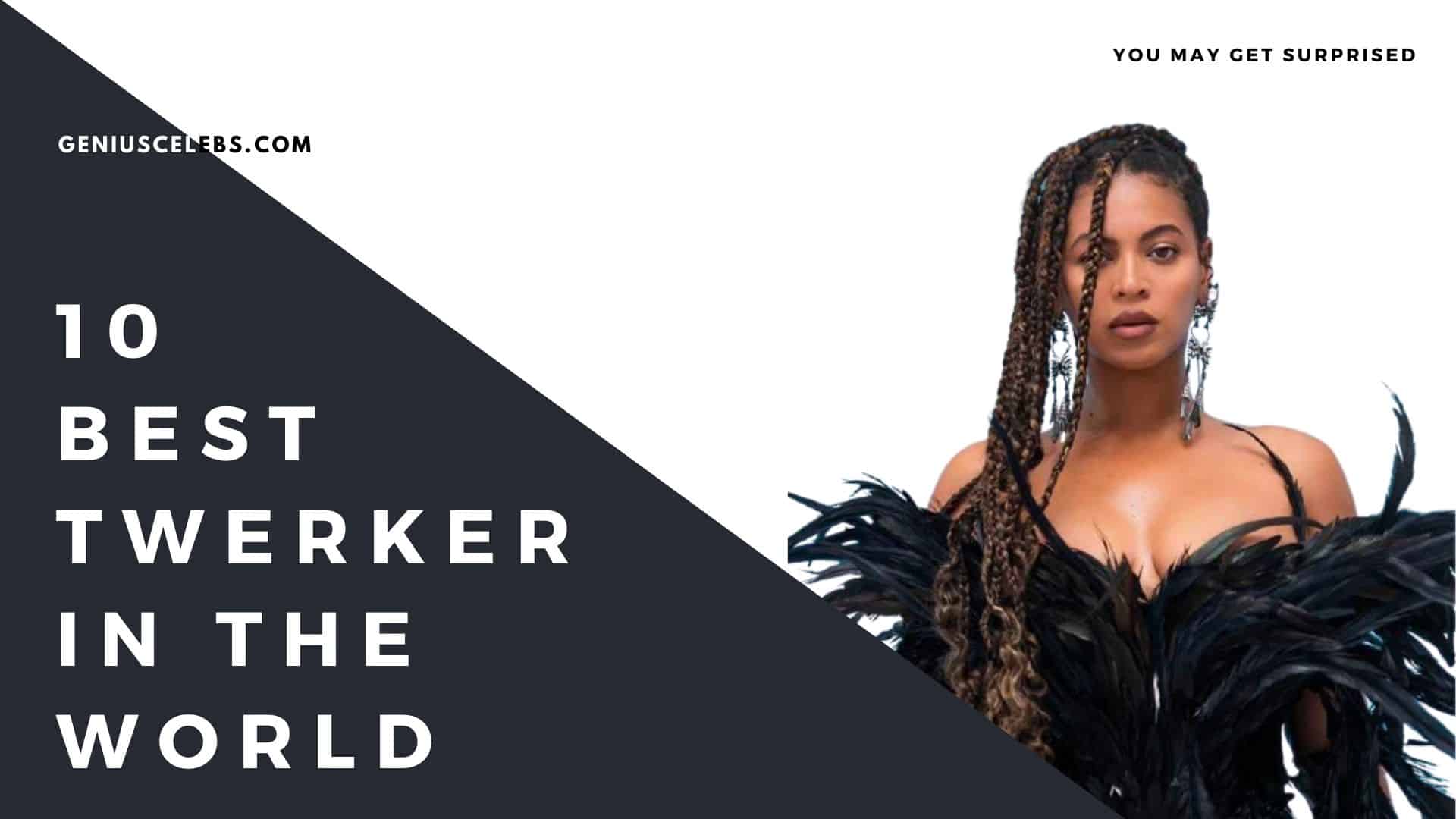 It is said to be the most sexually provocative dance ever invented.

Similarly, it is also said to have been first observed in Côte d’Ivoire in West Africa. One can observe a similar hip-thrusting movement known as Mapouka dance.

Swift is a famous singer and songwriter. She is known for her various popular songs like “Blank Space,” “Look What You Made Me Do,” and others.

Swift has a particularly unique way of writing lyrics that are based on her real-life experiences.

She connects to her fans with her life story, which is absolutely loved by the fans.

Coming into the spotlight, Tayor scored her top 40 hits when she signed with Big Machine Records in 2006.

Moreover, she is in a relationship with Joe Alwyn.

Twerk moment: Probably not the best twerker, but this particular twerk moment is from the Music video of Shake it off.

The overall song is just about leaving all things aside and dancing to the rhythm of the music.

Her full name is Selena Marie Gomez, and she was born on 22nd July 1992 in Grand Prairie, Texas, United States.

She is named after the famous American Tejano singer Selena.

As she grew up, she worked in a Disney Channel television series Wizard of Waverly Place. Surprisingly, at the age of 16, Selena Gomez signed a record deal with Hollywood Record.

However, she was not the only one to be signed in a particular record label as other artists like Miley Cyrus and Demi Lovato were already signed.

Her full name is Vanessa Anne Hudgens. She was born on 14th December 1988 in Salinas, California, United States.

She is a popular American actress and singer. Even though she is not that famous worldwide, she surely knows how to make headlines.

Vanessa started her acting journey from the High School Musical film series. Apart from that, she has appeared in movies such as The Princess Switch, Spring Breakers, and Bad Boys For Life.

Similarly, she is also a recipient of numerous accolades such as the Napa Valley Film Festival, Broadway World Washington DC Awards, among others.

Moreover, she is in a relationship with popular American MLB star Cole Tucker.

Twerk moment: She is an absolute twerk prodigy. She often keeps on posting twerk Tik Toks on her Instagram. She is one of the best twerkers of 2021.

Her full name is Belcalis Marlenis Almánzar. She was born on October 11th, 1992, in Washington Heights, New York, United States.

Cardi B is a famous rapper and lyricist. She is known for her overly sensual songs and dances.

Cardi may seem really bold and funny all the time, but she has one of the most difficult pastime stories.

Before her move into the music industry, she was a stripper who worked day and night to pay her bills and medical fees.

She says her hard times are the reason she thinks she deserves the top spot.

Twerk moment: Aforementioned most of her songs contain either sensual lyrics or include sensual dance moves.

In 2018 Cardi B twerked in one of her concerts despite being pregnant at the time.

Her full name is Ariana Grande-Butera. She was born on 26th June 1993 in Boca Raton, Florida, United States.

She is a world-renowned American singer and actress.

Ariana has been a part of numerous movies and TV shows such as Victorious, Sam and Cat, The Voice, Don’t Look,  to name a few.

Ariana is signed to Republic Records. Moreover, she is married to Dalton Gomez as of 2021.

Twerk moment: Even though she is not the best twerker in the world, Ariana has proved multiple times that she knows how to dance. She twerked on one of her live performances with rapper Nicki Minaj in 2014.

Her full name is Shakira Isabel Mebarak Ripoll. She was born on 2nd February 1977 in Barranquilla, Colombia.

Shakira is a famous Colombian-American singer and songwriter. She is known for blending the twist of Latin into American Music.

At 13, she made her debut with a straightforward song on Sony Music Columbia.  Her hit songs include Waka Waka, Hips Don’t Lie, Can’t Remember To Forget You, and others.

She released her song GIRL LIKE ME in collaboration with Black Eyed Peas in 2020.

Most people don’t know this, but her first two albums were a complete failure, but she didn’t let that failure stop her and continued pursuing the field.

Surprisingly, Shakira has won over 326 awards from 717 nominations. She has also won three Grammy Awards and 12 Latin Grammy Awards, making her the only Latin artist to win the most award in the history of Latin America.

Twerk moment: Shakira twerked in the halftime show of Super Bowl performance in 2020 with another Latin singer Jennifer Lopez.

Her full name is Megan Jovon Ruth Pete. She was born on 15th February 1995 in San Antonio, Texas, United States.

She initially garnered attention when videos of her freestyling became popular on Instagram.

Since then, she has released several mixtapes and also has released her studio album in 2020 titled Good News.

She seems to have changed and brought so many changes to the mainstream music industry.

She is currently signed to 1501 Certified and Atlantic Label. Similarly, she named herself Thee Stallion because of her height.

She has won numerous awards such as the 2019 BET Hip Hop Awards, Hot Ticket Performer Awards in 2019, Hustler of the Year Award 2019, Best Collaboration of the Year 2020, and Billboard Top Rap Female Artist Award 2021.

Moreover, she is in a relationship with Holly Thomas.

Twerk moment: She showed off her twerking skill back in 2019 at a live performance at The Fader Fort Austin, Texas.

Her full name is Jennifer Lynn Lopez. She was born on 24th July 1969 in Castle Hill, New York, United States.

Over the years, she has been a part of movies such as Hustlers, The Boy Next Door, Selena, The Second Act, and others.

Jennifer’s career didn’t take off as quickly because she worked as a dancer in TV shows and movies.

After working in several movies like “Out of Sight” in 1998, she established herself as one of the highest-paid Latin actors in Hollywood.

She released her debut studio album in 1999.

Furthermore, due to her immense popularity in America, the album paved the way for Latin-American music in the States.

Currently, she is divorced and lives with her two sons.

Twerk moment: Jennifer Lopez twerked in the halftime show of Super Bowl performance in 2020 with another Latin singer, Shakira.

Her full name is Robyn Rihanna Fenty. She was born on 20th February 1988 in Saint Michael, Barbados.

She came to the American music industry after Evan Rogers (a record producer) discovered her and decided to bring her to the United States to record a demo song with her.

Her famous song includes Umbrella, Desperado, Diamonds, among others. She has also voiced and acted in different movies such as Ocean’s 8, Home, Battleship, etc.

Rihanna is one of the few famous artists who have won over 9 Grammy Awards, 8 Billboard Music Awards, 13 American Music Awards, and seven MTV Video Music Awards (including the Michael Jackson Video Vanguard Award).

Her full name is Beyoncé Giselle Knowles-Carter. She was born on 4th September 1981 in Houston, Texas, United States.

Beyonce is a renowned American singer, actress, and businesswoman.

She gained worldwide recognition after she became the lead singer of the group Destiny’s Child.

Beyonce is one of the best-selling female artists of all time.

She is one of the few female artists who has won over 22 Grammy Awards and, surprisingly, six in one night. She is also the first black woman to ever headline Coachella in 2018.

Her hit songs include Halo, Countdown, Dangerously in Love, Crazy In Love, among others. Moreover, she is married to legendary rapper Jay-Z.

Hey, how are you feeling? Do you feel intrigued? Does this feel like you can do it too? Why not try?

Just a reminder that even though this looks simple, it is tough to do as it requires a good amount of dance practice, good hip movement, and proper muscles.

As you can see, even some of the artists cannot pull off it precisely like the other artists. As per the theory, anyone could twerk, but only a few can do it properly as every human body is different.

Read About: Top Ten Wrestlers of All Time

RIHANj is an IT undergraduate from Bangalore's Jain University. Specialization in ISE.

TTop List
When we think about shoes, we overall only think of them as not so important objects but for…
TTop List
A job is more than its typical definition; to get a paid position for employment. It shapes our…