There is a lot more you can do in the winter than Netflix and chill.

You might be wondering what to do in the freezing winter to entertain yourself and your family.

Well, think no more here we present you with the 17 best winter sports.

The information has been complied from trusted sites such as PlayersBio and Wikipedia.

Ice climbing is a sport in which competitors use ropes and other protective gear to climb vertical ice formations such as frozen waterfalls or ice-covered cliffs. 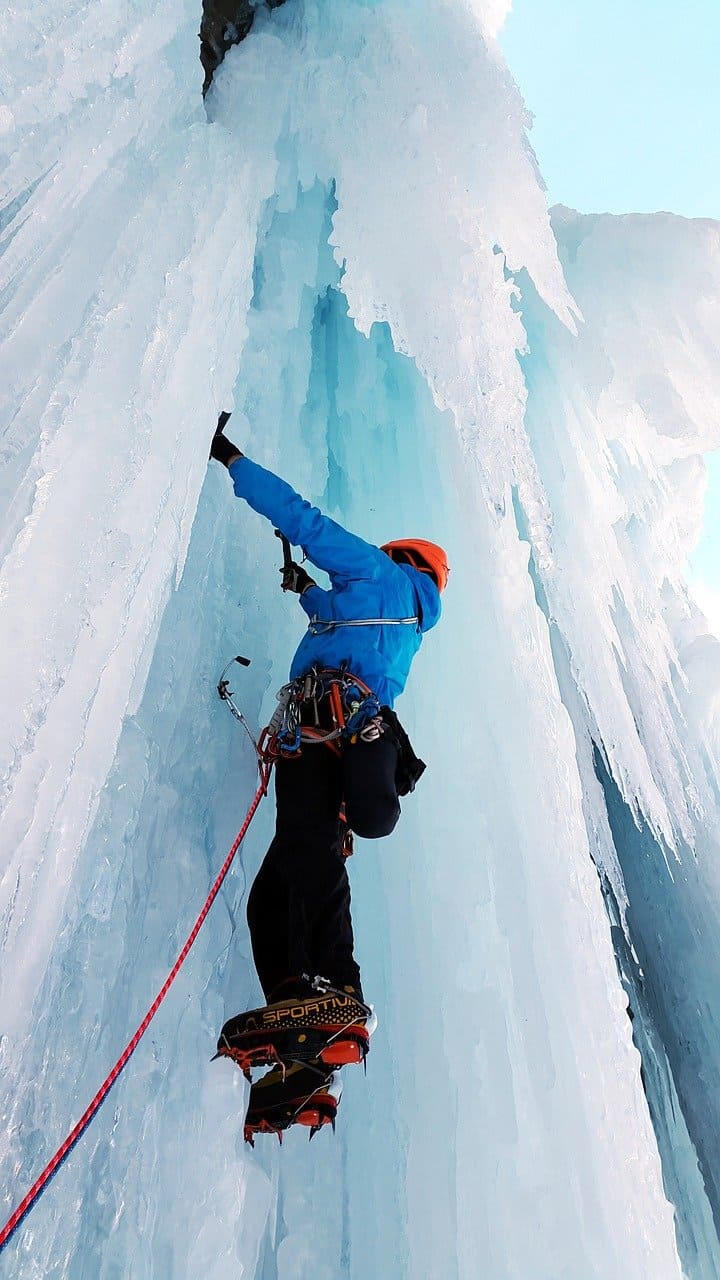 This activity is comparable to rock climbing, with the exception that the rocks are ice formations.

Ice climbing courses are divided into nine classes depending on height, angle, and the number of total pitches in the climb. Each grade rises in difficulty.

So, for ice climbing, training with specific equipment and gear is needed.

Did you know that ice swimming is a tradition in some parts of the world?

In Nordic and Eastern European countries such as Russia, Finland, the Baltic, and Ukraine, ice swimming is a tradition centuries old.

It is performed to promote fortitude, courage, and strength.

In North American and Europe, they have polar bear plunges, which are often held to commemorate New Year’s Day.

If you are seeking some adrenaline rush, you should definitely try this one.

This winter sport is one kind of skiing in which an athlete jumps as high and as far as they can off a ramp.

It was first contested in Norway in the late 19th century. It became popular in Europe and North America in the early 20th century.

Athletes jump from three distinct sorts of slopes. They each have their own calculation lines and maximum landing distances.

As a winter sport, Ice Speedway is primarily popular in the northern or northeastern places of North America and Europe.

This winter sport is frequently regarded as the wildest of all the speedway races since it demands the highest levels of skill and daring.

The bikes used in racing are classified as either full-rubber or studded, depending on whether or not spikes are placed on the tires.

On both the front and back wheels of the studded tire motorcycles, there are numerous 3 cm spikes.

Snow biking is another name for it.

Have you ever heard that there is a game involving snowballs?

It’s a surprising yet interesting winter sport. The term “Yukigassen” is snow-battle in Japanese terms.

It is now played in different European countries along with Australia and Canada.

Yukigassen is a team sport in which two teams of seven players compete against each other.

The game is played on an ice-covered court particularly constructed for it.

The court has numerous tiny wall-like obstacles that players can hide behind to avoid getting struck. The sport requires players to wear helmets and complete winter gear.

The gameplay includes the usage of two flags, one for each side, which is set on opposite ends.

A match is divided into three sets, each of which lasts three minutes.

Snow snake is a traditional Haudenosaunee game. The game includes four teams, known as “corner,” competing against each other. They compete by tossing their wooden “snow snakes” as far as they can away from the long trough or snow track.

The game was traditionally played when the men of the villages returned from hunting.

The snake’s distance traveled is added to that team’s score, and after a specified number of rounds, the team with the longest overall distance wins.

Snowkiting is a fun game to try with friends and family. It is an outdoor winter sport in which individuals glide on snow or ice using kite power.

The activity is comparable to water-based kiteboarding but with snowboarding or skiing-style boots. The fundamentals of kite flying are the same, but the landscape is different.

It has recently gotten a lot of attention and is becoming a lot more popular.

Snowkiting has improved throughout time as a result of new technology.

However, because this sport demands a lot of energy, over-layering oneself might result in a burning feeling after a time.

As a result, dress warmly for chilly winds while without overdoing it.

Shovel racing began in New Mexico in the 1970s, and it has since gained a reputation for being a competitive sport.

The sport is popular in various regions of the US. It comprises cyclists riding a shovel down a snowy slope in a race.

Initially, workers at ski resorts used shovels as sleds to go from one location to another.

Later on, it began by practicing with a basic snow shovel. Elite shovel racers can reach speeds of up to 70 miles per hour.

It was even featured in the Winter X Games in 1997, however, due to a massive accident that seriously wounded a contestant, the entire event was deemed a failure.

Ice hockey is an ice sport in which two teams compete against each other.

It includes a lot of pushing, shooting or passing a puck around the rink holding a hockey stick.

Goaltenders strive to stop the players from scoring by firing the ball into the net.

It was first played in Montreal, Canada, in 1875. The game is currently is played in the United States and a few other European countries.

The game is broken into three sections, each having a 20-minute playing duration and a 15-minute break in between.

This game also requires safety, so players should wear necessary equipment such as helmets, chest protectors, and mouth guards.

Ice diving is a form of diving that takes place beneath the ice.

Since it is a dangerous form of sports the diving under ice necessitates specific techniques and equipment.

To avoid becoming lost under the ice and losing their way back, many divers are tied.

It tests your body’s limitations and explores regions of the globe that you may not have seen before.

According to research conducted by FiveThirtyEight, curling is the most popular Olympic sport of the last decade.

It is a sport in which two teams of four players slide stones across an ice sheet toward a goal area divided into four concentric rings.

Because of a surprising amount of complexity, it is also known as chess on ice.

Moreover, it is also one of the earliest team sports, dating back to the 16th century in Scotland, when people curled stones on frozen lochs near Stirling and Perth.

Snowmobiling is similar to riding a motorcycle on snow, although many would say that it is a lot more enjoyable. The exhilaration of speeding through a sparkling woodland in a beast of a vehicle is addictive.

That’s why it is currently mostly used for recreational purposes. People love it because it is enjoyable and allows them to spend time outside with their friends.

The popularity of snowmobiling is increasing as people are taking the sport as a serious hobby.

Dog sledding is a form of skijoring, also known as sled dog/dog sled racing or dog mushing. It is quite popular in Canada, Russia, the United States, and a few European countries.

In this sport, a sled is pulled by one or more sled dogs to travel over ice and through the snow.

Furthermore, some races have different rules based on the number of dogs competing.

Even though it isn’t an Olympic sport, it is a fantastic one.

Along with exciting sport, sled dogs are employed for a variety of tasks in some locations, including mail delivery and medication distribution.

Thus, this is a one-of-a-kind winter sport that isn’t as risky as many others.

Snowboarding is a relatively new activity that originated in the United States and is currently one of the most popular winter sports and extreme sports in the world.

This is a game that involves the combination of the balance and speed needed on the snow that definitely rushes adrenaline coursing through your veins.

It is as well featured game in Winter Olympic Games and Winter Paralympic Games.

The inspiration for snowboarding came from skiing, surfing, and sledding.

Freeride, freestyle, and free carve are some popular styles nowadays.

If you really want to try an interesting sport this winter, then try ice racing. This popular winter sport involves driving cars, motorbikes across ice racecourses and frozen lakes.

Driving a car on a frozen pool, on the other hand, may appear dangerous. However, the event organizers measure the thickness of the ice. As a result, it’s a really safe game.

In addition, ice racing is also quite inexpensive when compared to other motorsports and hard-core racing.

Grabbing a pair of snow tires and installing them on-road vehicles will make a car ice-ready.

The sport includes gliding on snow wearing protective gear. Though modern skiing evolved from Scandavania, it may have been practiced more than 100 centuries ago in China.

It offers a variety of skiing options, including Alpine and Nordic skiing.

Albeit originally winter sport, it can be practiced indoors without snow, on dry ski slopes, with roller skis, with ski simulators, or outdoors on grass.

Ice Skating is said to have originated around 3000 years ago in southern Finland.

Skating on the frozen ponds and fens has been always popular and been recognized all over the world. It has been addressed as popular family entertainment sports and ice shows.

Along with fun activities to do with the kids, it’s a great idea or one of the goofy things to do after a few drinks.

So, it is a fantastic recreational activity.

TTop List
A job is more than its typical definition; to get a paid position for employment. It shapes our…
TTop List
Amazing Indoor Sports in the World!!! Whenever we hear the term sports, we normally associate it with football,…