As of January, 2022, the famous actor Charlie Sheen has a reported net worth of $10 million.

Charlie Sheen is mostly famous for his comedy character Charlie Harper in one of the longest-running American Sitcom series Two and a Half Men.

He was born Carlos Estévez on September 3, 1965, to his father, Martin Sheen & mother, Janet Templeton.

The place of his birth is said to be New York.

Charlie is the youngest son of the family, & his two older brothers Emilio and Ramon, and his younger sister,  Renée, are all actors.

Charlie Sheen Net Worth and Income

How much he earns at present is unknown, but there was a time when he grabbed about $1.25 million per episode from the famous show Two and a Half Men.

Once billed to have a net worth of around $15o million, his over expenditure on prostitutes & parties caused him to lose all his hard-earned money.

His potential downfall started when he had a spat with Chuck Lorre, the creator of the television show, Two and a Half Men.

Net Worth of Charlie Sheen in Different Currencies

Charlie Sheen’s net worth of $10 million can be converted to other foreign currencies as follows:

Although Sheen, at present, lives in a modest apartment in Malibu, California, there was a time when he owned multiple real estates in the country.

The first house he bought in 2006 for $7.495 million belonged to Hollywood producer Mike Medavoy.

The house was Mediterranean-style with 6 bedrooms & 8 bathrooms.

The mansion covered over 9020 square feet of living area.

In the same year, he bought a second home in the same neighborhood.

He later put the house on sale for $7.2 million.

Charlie Sheen once again purchased a property in the Beverly Hills in 2012.

The Spanish-style villa had 5 bedrooms & 6 bathrooms. He reportedly bought the house for $4.8 million.

All three properties had a swimming pool, spa, gourmet kitchen, theater & many other attractions.

In his lifetime, Charlie Sheen has owned more than 10 cars.

Throughout his Two and a Half Men days, he earned up to $1.25 million per episode. So, buying & collecting the cars were never difficult for him.

A Mercedes-Benz CLS 320 has always been his favorite car. He even used to drive it to the set of Two and a Half Men.

All three cars have a powerful engine along with great aesthetics.

Apart from being attractive, all the cars are quite luxurious in terms of ride.

Not only Mercedes-Benz & Porsche, but Charlie also has a special place for his three other cars, Bentley Continental GT Coupe, Bentley Flying Spur, & Rolls-Royce Phantom.

Charlie Sheen’s lifestyle has raised the eyebrows of the public in various instances.

Although he is said to be living in his modest Malibu apartment now, there was a time when he had all the riches he could have ever imagined. And, a brilliant lifestyle as well.

But, his bad-boy lifestyle had such a negative impact on his life.

He contracted HIV-AIDS, and in 2015 revealed his condition to the world audience.

His overspending habit and spat with Chuck Lorre eventually cost him his career, resulting in the downfall of the highest-paid television actor who once had a net worth of $150 million.

Even though Charlie Sheen is the father of five children, most of his vacations are never family-friendly.

In 2013, he was seen posing with three topless female adult stars on a trip to Hawaii.

Many high-profile news agencies covered this particular incident at the time.

Similarly, in 2018, he posted a picture of himself with a python around his body from his trip to the Moonlit Sanctuary Wildlife Conservation Park, Melbourne, Australia.

Apart from these, Sheen has been to many places for his vacation, giving his bad-boy vibes and turning them into a scandalous trip.

As per Look to the stars, Charlie Sheen has supported not less than six charities & foundations.

Similarly, he seems to have supported over nine different causes.

Charlie Sheen made some donations to charity during his Violent Torpedo of Truth tour in spring 2011, including the Organization for Bipolar Affective Disorder and the Bryan Stow Fund.

Charlie Sheen’s film career started in 1983, when he portrayed the character of Ron in Grizzly II: The Predator, the sequel of the previous movie Grizzly released in 1976.

In 1984, he appeared in the teen drama Red Dawn, alongside  Patrick Swayze, C. Thomas Howell, Lea Thompson, and Jennifer Grey.

From then until the year 2000, he played various roles in different movies & dramas.

Apart from these, he also provided the voice of the character, Charlie, in the animated movie; All Dogs Go To Heaven 2.

Charlie Sheen did not appear in any movie role until 2000. He replaced Michael J Fox for the last two seasons of the television sitcom Spin City.

Sheen was nominated for two ALMA Awards and won his first Golden Globe for Best Performance by an Actor in a Television Series – Musical or Comedy, for his role in the same series.

Charlie Sheen’s major breakthrough came in the form of the character, Charlie Harper in the CBS sitcom Two and a Half Men.

For his role in the sitcom, he garnered an ALMA Award & got nominated for three Emmy Awards & two Golden Globe Awards.

Before his downfall in 2011, Charlie Sheen had endorsed several products.

In 2011, Sheen signed an endorsement contract with Ad.ly, which would see him earn $1 million per year.

Similarly, he also acted as the brand ambassador for the beverage named Just Chill, earning over $3 million per year.

Charlie Sheen’s career started in 1983 when he appeared for the first time in the movie  Grizzly II: The Predator, which wasn’t released until 2020.

After that, he has appeared in dozens of movies & dramas as a lead actor or in supporting roles.

He then portrayed the famous Charlie Harper character in the next American Sitcom Two and a Half Men from 2003 up until its eighth season.

Charlie was cast out by the show creator, Chuck Lorre, when he asked for pay raise and allegedly assaulted Chuck.

This incident caused a huge negative impact on his career & once the highest-paid television actor with $150 million worth became quite bankrupt.

Sheen’s contract with the series was terminated by CBS & Warner Bros. on March 7, 2011.

After that, in the same year, he played a role in the hip-hop music video “Steak & Mash Potatoes” by Chain Swangaz featuring Brother Marquis.

Post-2011, Charlie Sheen is rarely seen in the movies & television shows, with the exception of just a few appearances in the interviews.

What is Charlie Sheen doing these days?

With the downfall of his career, Charlie is working on a new show which he hopes will make his audiences appreciate his work once more.

As of 2021, Charlie Sheen is not in a relationship with anyone. Although, he has had at least 43 relationships in the past.

Can Charlie Sheen play the piano?

Although his character Charlie Harper plays the piano in the show, Two and a Half Men, in real life, Charlie Sheen does not know how to play the piano.

Ujwal is a civil engineer by profession and a content writer by passion. He has over 3 years of professional experience as a freelance writer under various niches including Travel Itinerary, Health & Fitness, Celebrities Gossips, and many more. 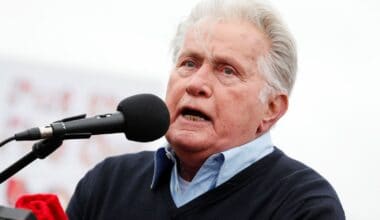 Read More
One of Hollywood’s most prominent actors, Martin Sheen’s net worth, is $60 million. Martin Sheen rose to prominence…
NNet Worth
Rick Steves is an American best-selling guidebook author, outspoken activist, and public television host with a net worth…