An American author, global health advocate, and former first daughter Chelsea Victoria Clinton has a startling net worth of $30 million.

Chelsea is the single child of former U.S. President Bill Clinton and former U.S. Secretary of State, and presidential candidate of 2016 Hillary Clinton.

She was born on 1980, February 27, when her father was governor for Arkansas. And also was the first daughter from 1993 to 2001 during her father’s presidency.

Clinton contemporarily works with Clinton Foundation as vice-chair and works to improve lives and inspire emerging leaders across the United States and worldwide.

Moreover, being a longtime public health advocate, Chelsea also serves on the Clinton Health Access Initiative boards and the Alliance for a Healthier Generation.

In addition, She also works as a lecturer at Columbia University’s Mailman School of Public Health.

Besides, the former first daughter has also published several books to date as an author and co-author.

And, two of her non-fiction books for children are listed as the best-selling book.

She has also published an adult scholarly book on global health policy.

Chelsea Clinton has been showing her best version of herself in each work she does and has also been awarded several times for her works.

Moreover, Chelsea is a proud mother of three children, two sons, and a daughter.

She even was awarded for being the best mother by Mother’s Day Council: Outstanding Mother Award.

Chelsea Victoria Clinton, aka Chelsea Clinton, the American author, and global health advocate, has a total net worth of $30 million.

After graduation from Stanford University, Chelsea worked at McKinsey & Company for 3 years, where she received more than a $50,000 yearly salary.

Her second work was with Avenue Capital Group, where she was given at least a $100,000 yearly salary, and her yearly bonus would go up to $150,000, outnumbering her salary.

Clinton also worked as a special correspondent on NBC from November 2011 to August 2014, where she received an annual salary of $600,000.

Further, she is a board member on Expedia, which gives her at least $302,880 to attend a couple of meetings yearly.

Daily mail reported, the former first daughter took home at least $600,000 from her work as a board member in IAC and Expedia in 2018.

There were just 6 board meetings of IAC in 2018, and that of Expedia were only 2.

In Addition, the former first daughter is also one of the best-selling authors. Her popular children’s book also makes her a good fortune yearly as a revenue.

Lastly, She also earns as much as $75,000 per speaking engagement, which completely goes towards the Clinton Foundation.

Net Worth of Chelsea Clinton in Different Currencies

Let’s have a look into Chelsea Clinton’s net worth in different currencies, including the cryptocurrency BitCoin.

Chelsea Clinton lives a lavish life in Manhatten, New York, with her family.

Moreover, the apartment is the longest & most extended apartment in the entire city, stretching a whole block between 26th and 27th street.

You could imagine, the apartment is so big that while one enjoys the party on one part of it, the other can have a sound sleep on the other.

Also, the apartment includes 13 rooms, including five and a half bathrooms and four bedrooms.

Chelsea Clinton has an impressive collection of cars. Interestingly, she was offered 3 cars as a gift on her 16th birthday, even before she had a learning permit, which her parents denied.

Now, she has a collection of cars, including Mercedes Benz ML class ML 250, Audi q5, BMW x6, and GMC Yukon.

It has a 2.1-liter four-cylinder engine with a top speed of approximately 210 Kmph.

Moreover, another SUV in the former first daughter’s garage is a white Audi Q5, with a decent price tag of $45,195 for its top speed, comfortable body, and cargo space.

Further, she owns a BMW x6, a mid-size luxury crossover with a sporty aesthetic, with a whopping starting price tag of $66,045 in 2021.

Also, Clinton owns a GMC Yukon, a large SUV perfect for the mother of 3 children. Plus, it is also given the second rank on a Large SUV for its impressive inside and out.

With her immense net worth, Chelsea Clinton lives a lavish lifestyle along with her family, which includes her husband and 3 children.

Talking about her early life, Chelsea was always in the media’s eyes since her teenage.

She is actually the most cherished first child in media, leaving behind all other predecessors.

However, extreme coverage was not always good as she got annotations on every aspect of her, even her looks.

As her big nose inherited from her father with a bump at the middle had become the talk of the town, Chelsea underwent plastic surgery at the time of her wedding.

Moreover, her wedding with investment banker Marc Mezvinsky, a long-time friend and partner, was also a lavish occasion.

Clinton, even though she has been highly liked and followed by the media since her first daughter’s life in the White House, she likes to live a private life.

At present, her deluxe apartment in New York serves the purpose of privacy as it provides privacy even between the spouses along with providing a huge space for their children to play.

Apart from that, it’s not only butterflies and rainbows she lives a hectic life while working with different foundations, giving speeches, attending meetings, and being involved in politics sometimes.

Chelsea Clinton is spotted taking a break and having a good weekend vacations time and again.

However, the place and time are normally kept secret until a paparazzi finds them and is spilled all over media.

Talking about the latest vacation trip, it was back in 2017 when she made a trip to London with her whole family, husband, and two children.

But, the two children were not seen on the frame on their dinner night out and early morning visit with one of their friends.

Moreover, thanks to their immense net worth, the family is always seen vacationing in the most luxurious ways possible every time they go out.

Chelsea Clinton is a long-time philanthropist now. She has been involved with several foundations and causes.

Chelsea is mainly a health advocate and works closely with different foundations that work on health like children’s health and HIV AIDS.

Further, she has been part of causes like Depression and Suicide, and Mental Challenges with the Jed Foundation.

Furthermore, she also supports several causes related to health with Alliance for a Healthier Generation,
American Foundation for AIDS Research and Walkabout Foundation.

Besides, she is Vice Chair of the Clinton foundation, a foundation first established by Bill Clinton in 1997 as William J. Clinton Presidential Foundation.

The foundation was later renamed the Bill, Hillary & Chelsea Clinton Foundation in 2013.

Moreover, the causes supported by the foundation are Economic/Business Support, Education, Environment, Health, Peace, and Poverty.

Besides, the foundation is also listed at number 48 by Forbes magazine on the 100 largest US Charities list.

The Clinton Foundation has a huge budget, with the donations mainly coming in from US and foreign corporations, governments, political donors, and others.

Also, the Clinton family gives paid speeches whose all the proceeds are forwarded towards the Foundation’s funds.

Further, the Clinton Global Initiative, a part of the Clinton Foundation, also works as an autonomous unit to serve the causes like Education, Environment, Health, and Poverty.

Chelsea Clinton has appeared in some of the movies as a guest.

Her first experience in movies was in 1996 in the film Beavis and Butt-Head Do America, where she was portrayed as being flirted by Butt-Head in the White House, and she responds by tossing him out a window.

Moreover, Clinton was seen as President of the United States in a Disney Channel Original Movie set in the year 1999 Zenon: Girl of the 21st Century.

And also, in Clarissa Explains It All, the lead character imagines her as President of the United States.

Furthermore, in 2015, Chelsea appeared in a Sesame Street with Elmo, promoting the importance of reading to young children.

Chelsea Clinton has made several wise investment decisions that are bound to provide her good income yearly.

Again in 2013, the couple bought the largest apartment in the city with 5,000-square-foot space with five and a half bathrooms and four bedrooms.

The apartment is luxurious, ultra-modern, and made environmentally conscious, which cost them $10.5 million.

Further, Clinton has also made investments in stocks in companies like IAC.

Moreover, Metrodora Ventures has already kickstarted its investments and has invested in three startups to date.

The production company mainly intends to share the stories of inspirational people. It has already started its first project about Trailblazing Women.

Chelsea Clinton is an established writer and has written several books to date.

2017 She persisted: 13 American women who changed the world

2018 She persisted around the world: 13 women who changed history

2019 Don’t let them disappear: 12 endangered species across the globe

2020 She persisted in sports: American Olympians who changed the game

Moreover, Chelsea has co-authored a scholarly book, 2017 Governing global health: who runs the world and why? with Devi Sridhar.

Further, she has co-authored two books with her mother, Hillary Clinton:

The Book of Gutsy Women: Favorite Stories of Courage and Resilience 2019

Clinton now works for Clinton Foundation and Clinton Global Initiative,  with a notable role on the foundation’s board, i.e., Vice-chair.

Further, she also worked as a special correspondent for NBC News from 2011 to 2014.

Besides, Chelsea is a renowned book author with numerous published books as author and co-author.

Where did Chelsea and her husband Marc meet?

Chelsea and her husband Marc met in a Renaissance Weekend retreat in Hilton Head Island, South Carolina in 1999.

Is Chelsea Clinton involved in politics?

Though Chelsea is not in any major roles she involves with the Democratic party.

Chelsea has also kept moving into politics a “definite maybe”. However, she campaigned for her mother during her 2008 and 2016 presidential campaigns.

Yes, she undergrew plastic surgery on her nose before her marriage.

NNet Worth
As of , , American Youtuber and social media entrepreneur Jake Paul bags a total net worth of…
NNet Worth 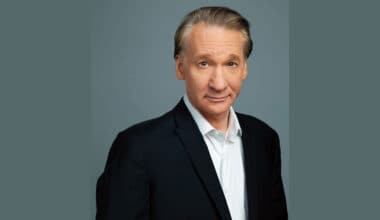 Read More
One of the most admired TV hosts, Bill Maher’s net worth is $140 million. He is a stand-up…