The second wealthiest and moneyed person in the world, Elon Musk has a net worth of $172 billion.

Musk is an entrepreneur, businessman, magnate, and inventor. He was born to a millionaire South Asian father and a model-dietician Canadian mother.

Early on, at the young age of 12, he demonstrated his creativity when he taught himself to program, creating a game Blaster, and also successfully managed to sell it.

He went to Canada at the age of 17 to attend Queen’s University and escape military service in South Africa.

Musk obtained his Canadian citizenship from his Canadian-born mother in order to make it easier to get to the States.

Soon after, Musk left Canada in 1992 and attended the University of Pennsylvania to study economics and physics.

Musk dropped out of Stanford after just two days into his Ph.D. degree; instead, he attempted to start an internet startup and become a part of the internet revolution

When he sold his start-up business, Zip2, he became a multimillionaire in his late twenties.

Musk is now the mastermind behind the creation of Paypal, SpaceX, and Tesla Motors.

Musk’s wealth is tied up in his massive holdings both in Tesla and SpaceX stock.

Similarly, the web software company Zip2 that he co-founded with his brother Kimbal was acquired by Compaq for $307 million in 1999.

Top corporate executives like Musk, instead of receiving cash, often receive most of their compensation in the form of potentially illiquid stock or options in the companies they lead.

The New York Times, May 2019 report indicated that the Tesla CEO received stock options worth nearly $2.3 billion in 2018.

However, the electric-car maker disputed that claim, saying Musk “actually earned $0 in total compensation from Tesla in 2018.”

So, Musk’s net worth fluctuates with the rise and fall of Tesla stocks.

Net Worth of Elon Musk in Different Currencies

Musk left a tweet on May 1 stating he intended to sell almost all of his physical possessions and that he “will own no house.”

He later explained this move of his in the Joe Rogan experience podcast:

“Possessions kind of weigh you down.

“They’re kind of an attack vector, you know? People say, ‘Hey, billionaire, you’ve got all this stuff.’ Well, now I don’t have stuff. Now, what are you going to do?”

Since then, his property has been on sale on real estate sites.

Two of Musk’s properties in Los Angeles’ Bel-Air neighborhood were up for sale on the property website Zillow.

He bought it for $23 million in June 2017 and asked for $100 million while being sold, however, the value decreased substantially. The mansion is very close to the Tesla headquarters.

Since then, along with creating and designing cars, he has gone on to own lavish cars himself.

He was also said to have owned a Ford Model T, which was produced by Ford Motor Company from 1908 and 1927.

Musk bought the 1967 Jaguar Series 1 E-type Roadster when he received a $40,000 paycheck after selling his company Zip2.

It was a dream car of his since age 17 as a little gift for himself.

Moreover, Musk also decided to buy the actual spy car of the 1977 ‘James Bond’ film “The Spy Who Loved Me.”

The Guardian report revealed that Musk paid $997,000 for it.

Musk also owns the high-performance car Porsche 911. The starting price of the car now is $91,100.

He also owned a McLaren F1 car at some point which unfortunately got wrecked in an accident in the Silicon Valley.

Musk is undoubtedly a car lover, but nothing can beat his love for the first car that Tesla ever introduced, Model S. Defined as the “best car in its class in every category,” this car is arguably Musk’s daily driver.

The jet is worth an estimated $70 million, where the ER is for Extended Range, meaning a nonstop reach of the industry’s highest performance long-range business aircraft.

Musk is not really a “watch guy.”

The rare occasion that he is spotted with a watch has been a special edition TAG Heuer Carrera Calibre 1887 SpaceX Chronograph.

This watch is branded with a SpaceX rocket on the front and rear of the case.

A limited-edition timepiece was released in 2012, not only as a collaboration with SpaceX but also to honor the 50th anniversary of the model being the first watch to be worn in space by John Glenn in 1962.

Elon Musk’s daily routine is very disciplined.  Musk, who sleeps for only around 6 hours, is at work from 7 in the morning.

Work consumes the bulk of his time and his typical working week adds up 85-100 hours.

Even in an extremely packed life, Elon somehow still finds time to pursue his passions.

Reading is one of them, and he finds some time to read every day.

He also makes sure that he is taking out time for his children.

Unlike other CEOs who often fly out for vacations citing work pressure to relax, Musk, on the other hand, opines that “Vacation will kill you.”

This comment came after his long list of bad experiences that he gathered during the few vacations he took.

It included contracting life-threatening malaria, his rocket exploding, and also a vote of no-confidence being delivered against him.

Despite the horrible consequences that followed with his trips, Musk has reportedly been on at least two vacations, one to Chile and the other to Australia.

Musk has donated almost $150 million directly to charities within just the first four months of 2021.

The Musk Foundation, founded in 2002 by Musk and his younger brother Kimbal, is a private nonprofit.

Musk is believed to have started the organization with $2.5 million.

In the last few months, Must has been quite aggressively engaged in the charity business.

Similarly, he also created a single-biggest donation, a $100 million jackpot for the winner of a climate contest.

He provided another $100 million for Thursday’s prize.

Along with that, he also donated to Rio Grande Valley in South Texas a total of $30 million.

He also donated $5 million to Khan Academy, a platform for online courses.

Lastly, $1 million to Feeding Texas, which operates food banks in the new home state of Musk and his foundation.

He also provided gifts of undisclosed amounts to a space-focused competition run by SteamSpace, and a project run by UNICEF to expand internet access in the developing world were

Musk has worked both as a producer and actor (mainly as a cameo).

Elon Musk, who is known as the Iron Man in the real world, had a 15-second cameo role in Iron Man 2, which was released in 2010.

Similarly, he has also appeared in The Big Bang Theory, Young Sheldon, South Park, a romantic comedy film Why Him? and in Men in Black: International.

He has also been part of famous animated projects such as The Simpsons and Rick and Morty.

In addition to cameos, Elon Musk has also worked as a producer in a handful of documentary projects.

This includes The Rider and The Storm, Baseball in the Time of Cholera, Dumbstruck, Thank You for Smoking, and Puzzled.

Among his many investments up to date, the seven stocks that he has also brought to the spotlight, which include AGC, Bitcoin, Etsy, Modine Manufacturing, Paypal, Sika, and Tesla.

His other investments mainly revolve around Artificial Intelligence, Charitable Trusts, and Foundations, Financial Services, Environmental and Technological Projects, among others.

One of his failed investments in Halcyon Molecular Inc., as the company shut down in 2012 due to lots of competition in the same field.

The privacy-focused messaging app- Signal reached the top of the major app charts largely because of Musk’s endorsement.

A tweet by Musk on January 7, “Use Signal,” helped it gain the top spot, partly also due to WhatsApp’s recent controversy.

The most popular book about Elon Musk is “Elon Musk: Tesla, SpaceX, and the Quest for a Fantastic Future.”

The author of the book is Ashlee Vance, and it was published in 2015.

The book captures Elon Musk’s childhood up to the time he spent at different companies including Zip2, PayPal, and then onto SpaceX, Tesla, and SolarCity.

For this book, Vance managed to get regular interviews with Musk, and also with those who were there at the most important points of his life.

However, Musk had no control over the biography’s contents.

This is not the only book written on him; the other books on Musk include Elon Musk: A Biography of Billionaire Entrepreneur Elon Musk, Liftoff: Elon Musk and the Desperate Early Days That Launched SpaceX Elon Musk: The Life, Lessons & Rules For Success and Elon Musk: A Mission to Save the World.

Along with being a popular figure with many biographies written about him, Musk is an avid reader himself.

His favorite books include:

“Structures: Or Why Things Don’t Fall Down” by J.E. Gordon

“Merchants of Doubt” by Erik M. Conway and Naomi Oreskes

“Lord of the Flies” by William Golding

The “Foundation” trilogy by Isaac Asimov

Did you know the CEO of Amazon is worth $200 Billion?

Musk is an entrepreneur and business magnate.

He helped create SolarCity in 2006,  which is a solar energy services company that was later acquired by Tesla and became Tesla Energy.

Likewise, in 2015, he co-founded OpenAI, which is a nonprofit research company that promotes friendly artificial intelligence.

Bored of the busy traffic, Musk also founded The Boring Company, which is a tunnel construction company.

Musk has proposed the Hyperloop that refers to a high-speed vactrain transportation system.

Tesla has once bought $1.5 billion worth of bitcoin.

So, Elon Musk, through his messages on Twitter, has been credited for raising the prices of cryptocurrencies, including bitcoin,

Who is Elon Musk’s Mom?

Elon’s mom, Maya Musk, is a model and certified dietician and is known to have published a book, A Woman Makes a Plan: Advice for a Lifetime of Adventure, Beauty, and Success.

Musk is considered as the real-life Tony Stark and is also known to have a cameo role in Iron Man 2, released in the year 2010. 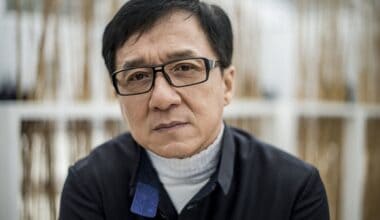 Read More
One of the most iconic figures in the entertainment industry, Jackie Chan’s net worth is $400 million. Jackie…
NNet Worth
Rob Dyrdek is a $100 million net worth MTV reality personality, former professional skateboarder, actor, producer, and entrepreneur.…