James Conner illness and health have been a significant concern for the footballer’s game time.

James Conner plays as the #6 running back for the Arizona Cardinals of the NFL (National Football League).

The Pittsburgh Steelers selected him in the third round of the 2017 NFL Draft. He played college football at Pittsburgh.

Conner played with the Steelers for three years before joining the Cardinals in 2021.

James Conner Illness And Health Update: He Had Cancer

James Conner announced his diagnosis of Hodgkin’s lymphoma, a form of Blood Cancer, on December 4, 2015.

Despite the diagnosis, the RB said, “I choose not to fear Cancer… I will play football again.”

After tearing his medial collateral ligament (MCL) during the Pittsburgh Panthers’ first game of 2015, he attended rehab and started experiencing extreme fatigue and other symptoms.

It led doctors to perform a chest x-ray showing his stage 2 Hodgkin’s Lymphoma, a blood Cancer affecting the immune system.

Luckily, if caught early, the illness can be treated effectively. Although the diagnosis stunned James, his doctor, Stanley Marks, told him his lymphoma had a high cure rate.

Conner underwent 12 rounds and finished his last chemotherapy appointment on May 9, 2016.

Even during his treatment, he continued participating in non-contact drills with the Panthers team as far as his body would allow.

He appeared on April 21, 2016, episode of The Ellen DeGeneres Show and met Kansas City Chiefs safety Eric Berry, a fellow patient of the condition.

Berry, who overcame Hodgkin’s lymphoma, was seen by Conner as an inspirational figure. During Conner’s treatment, the two players had spoken via text but never met in person.

Finally, Conner announced on Twitter that he was Cancer free on May 23, 2016.

Yes, James Conner is playing in today’s match against the New England Patriots at the University of Phoenix Stadium.

The Arizona Cardinals QB is a regular player on the team. Draft Kings Nations reports Conner suffered an injury in Week 14 but returned to the game on Tuesday.

He had suffered an injury after a 4-yard run in the second quarter and gone to the injury tent for further evaluation.

It was a disaster of a game for the Cardinals’ injuries, with Kyler Murray already possibly suffering a long-term knee injury.

He is the youngest of five brothers, which include Glen, Richard, Michael, and Rico. Glen, Richard, and Michael are related by blood, whereas Rico is a stepbrother from his mom’s second marriage.

He was named Express’s “Defensive Player of the Week” on April 22, 2019, with seven tackles, three tackles for loss, three sacks, and one interception in their 30-6 win over the Westmoreland Wolves.

James McDowell Highschool in Millcreek Township and majored in communication at the University of Pittsburgh, where he committed to play college football in August 2012.

Explore More: Yes, Hunter Doohan Is Gay And Married To His Husband Fielder Jewett, Family, And Net Worth

Are Josh Sweat And Montez Sweat Related? People are curious to know about their family as their last name matches, and they are brothers.  Defensive end Shaquan Montez Sweat plays for the Washington Commanders of the National Football League. Before being selected by Washington in the first round of the 2019 NFL Draft, he played…

Josh Dobbs health update: he has been suffering from Alopecia Areata for nearly two decades. The quaterback now spreads awareness about the autoimmune disease.  Born Robert Joshua Dobbs, Josh Dobbs is a talented football player. He plays as a quarterback for the Tennessee Titans of the NFL. Before that, the Georgis native played for Cleveland…

People are searching for Tim Tebow’s Parents as the NFL player canceled a scheduled appearance at First Baptist Church in Dallas. Tim Tebow is a former American football player; he was a National Football League player (NFL)for five seasons. He attended Trinity Christian Academy in Jacksonville, where he excelled in baseball and football. Tebow played… 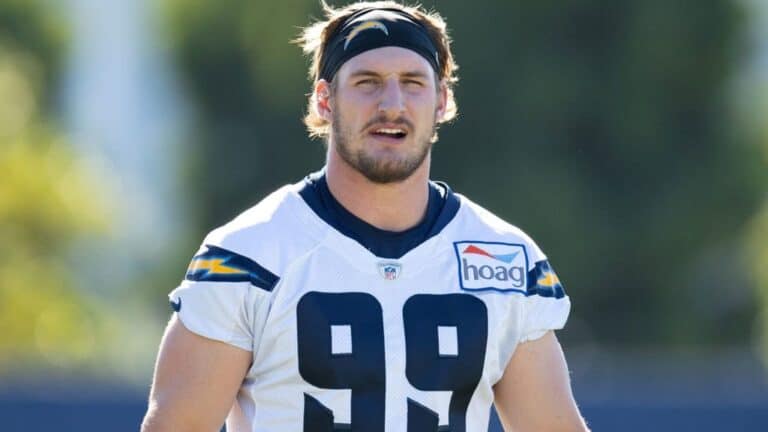 People are interested in Joey Bosa Wife because Joseph Bosa plays outside linebacker for the Los Angeles Chargers of the National Football League. He was chosen third overall by the (then San Diego) Chargers in the 2016 NFL Draft after playing college football for Ohio State. He was then voted NFL Defensive Rookie of the…

Robert Woods is an American football player for the Tennesse Titans in the NFL (National Football League). Does NFL player Robert Woods have kids? The Superbowl champion has a kid with his wife, Alexandra Woods (née Barbee). The couple welcomed a daughter, Shi Demi Woods, on July 19, 2021, at 3:06 pm. Woods is a…