An American rapper, songwriter, record executive, entrepreneur, and media proprietor Shawn Corey Carter known as Jay-Z has a net worth of $1.4 billion.

Generally, Shawn Corey Carter is widely known as the most influential hip-hop artist ever in hip-hop history. In detail, Jay-Z is the first rapper to become a billionaire.

To begin with, Jay-Z released his first album after founding Roc-A-Fella Records in 1995 was Reasonable Doubt, which brought him huge success in his music career.

In addition, Jay-Z has earned many achievements such as Grammy, Hall of Fame induction, Tony awards, etc.

Jay-Z’s Net worth and Income

American rapper, businessman, record producer Shawn Corey Carter AKA, Jay-Z, has a net worth of $1.4 billion.

On an average, Jay-Z collects $70 to $80 million every year through his music and businesses.

Here is the Net Worth of Jay-Z throughout his career:

Net Worth of Jay-Z in Different Currencies

Let’s look into Jay-Z’s net worth in different currencies, including the cryptocurrency BitCoin.

When it comes to real estate, Jay-Z and his spouse Beyonce own almost $150 million worth of real estate.

During 2008, the couple bought a mansion on Indian Creek Island in Miami worth $8 million. Later they sold this mansion for $9.3 million.

Additionally, in 2017, Jay-Z and Beyonce paid $26 million for the Pond House Mansion in the Hamptons.

Similarly, in 2017, the couple paid $88 million for the Mansion in Bel Air, California.

The mansion is 30,000 sq. ft., including a full basketball court, 2 acres of land, 15 garages for cars, a media room, bulletproof windows, and multiple pools.

To sum up, the couple own a private island in the Bahamas worth $4 million.

Jay-Z owns an incredible Car Collection, from vintage rides to exotic supercars worth above $10 million.

To enumerate, the Vintage 1957 Corvette C1 is the first Corvette worth $3000 when it was manufactured.

Similarly, Jay-Z’s Alfa Romeo Spider is a second-generation series 2 spider built between the 70s and 80s. It is Jay-Z’s second vintage car.

Including Rolls- Royce Silver Cloud, Jay-Z gifted this luxury automobile to his wife on her birthday.

Moreover, Rolls- Royce Silver Cloud is also a vintage car made between 1955 to 1966, and there is only 2716 piece available.

On the other hand, Jay-Z owns one of the fastest cars globally, the Bugatti Veyron Grand Sports, worth $2 million. In fact, his Wife gifted this Super Car on his 41st birthday.

To sum up, Jay-Z owns Maybach Exelero, which is known to be the most expensive car.

Maybach Exelero’s worth is $8 million.

Jay-Z travels around the globe in his own Bombardier Challenger 850 jet.

In 2012, Bombardier Challenger 850 was gifted to Jay-Z by his wife Beyonce on Jay’s first Father’s Day.

Specifically, the Bombardier Challenger 850 is worth $40 million, and it’s designed for the whole family.

Especially, Jay-Z is a Non-denominational monotheistic.

On the other hand, Jay-z used to wake his siblings at night while making some drum patterns on the kitchen table.

Seeing this his mother bought him a boombox on his birthday.

After that, he kicked off his freestyle and began to write his own lyrics.

Before Jay-Z was known as Jazzy around his neighborhood.

Additionally, Jaz-O was Jay-Z’s mentor, and Jay adopted his stage name after his mentor.

To explain, Jay-Z was referred to as Big Daddy Kane’s hype man in the early 1990s.

Jay-Z’s first solo single was In My Lifetime, released in 1995.

Jay-Z and Beyonce, along with their children, were on Europe for summer vacation.

The Benetti Yacht includes eight suites, a gym, a spa dining area for 12 people, a waterfront entertainment area, and a theater.

To sum up, Beyonce shared a photo of her and her twins from vacation.

Jay-Z is also known as a philanthropist. Since 2003 Jay has supported different charities.

In 2003, Jay founded The Shawn Carter Foundation together with his mother.

Likewise, in 2020 Jay-Z also donated $1 million to the Covid-19 pandemic relief in New York through his Shawan Carter Foundation.

American Rapper, songwriter, Businessman have made an appearance in 13 movies.

Jay-Z’s first appearance in the film industry was in 1998. He was first seen in the film Streets is Watching.

Here is the list of the films in which Jay-Z has made an appearance.

Jay-Z earns not only from the music industry but also from his business.

To explain, Jay-Z rooted himself as a successful businessman.

He created a business empire for himself, including Clothing, real estate, record label, sports team, and beverages.

Here is the list of some businesses that Jay-Z has invested in:

Jay-Z released his first book titled Decoded. In detail, Decoded is a book about a collection of lyrics and their meaning.

To explain, Decoded was published by One World on November 1, 2011.

Jay-Z started his career from his debut album Reasonable Doubt in 1996. The album ended up 23rd on the U.S. Billboard 200.

After that, Jay-Z released his second album titled In My Life VOL.1. then, he released Hard Knock Life Vol. 2, which was a hit of his career.

To enumerate, Jay-Z is the most successful business, man! According to him. Furthermore, Jay collects $70 million per year.

Jay-Z is one of the successful singers/rappers and best-selling artists all over the globe.

Does Jay-Z own a private jet?

Yes, Jay-Z owns a private jet named Bombardier Challenger 850 jet. He got the jet from his wife for father’s day.

Does Jay-Z own a yacht?

Jay-Z was seen on a yacht in his Europe Summer Vacation, which he chartered.

However, Jay-Z doesn’t have a yacht personally.

What business does Jay-Z own?

American rapper, songwriter is also an entrepreneur, and he calls himself a businessman!

He owns many businesses; some are Rocawear, Armand de Brignac, Roc Nation, etc. 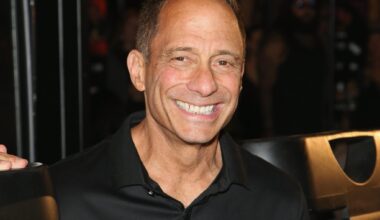 Read More
One of the famous media personalities, Harvey Levin’s net worth is $20 million. Harvey Levin is a famous…