One of the most elite socialites and America’s favorite momager, Kris Jenner’s net worth is $170 million.

Kris Jenner is an entrepreneur, author, creator, and executive producer of one of the longest-running reality shows of all time Keeping Up With the Kardashians.

She is also admired for her appearances on ‘America’s Next Top Model‘ and ‘The Talk.‘

Kris Jenner is a contentious, bossy, stylish, strong, motivating, and infuriating mother figure all rolled into one.

She has virtually single-handedly transformed the Kardashian name into a billion-dollar brand. The Kardashian empire would not exist if it weren’t for this one woman.

How well do you know about Kris Jenner? Let’s check out some of her facts.

Kris Jenner | Net Worth and Income

Kris Jenner’s net worth is $170 million as of July 2022. She is a supermom who manages her six celebrity children.

She garnered fame by appearing on Keeping Up with the Kardashians in 2007 and served as an executive producer.

Kris has undoubtedly amassed a large fortune from the show’s income given its fame and popularity.

Furthermore, Kris is the manager for her children; therefore, she receives a 10% management share of their earnings.

In 2015, each Kardashian-Jenner member was paid $500,000 per episode of Keeping Up with the Kardashians.

According to some sources, the cast receives $150 million per season of the show, which equates to $930,000 per episode.

Kris earned $25 million from the contract for new seasons of Keeping Up with the Kardashians in March 2019.

Similarly, Forbes ranked her 84th on the list of highest-earning celebrities in 2018, with a $37.5 million salary that year.

Earning From Social Media and Endorsements

Kris Jenner is a well-known television personality with over 46 million Instagram followers.

Interestingly, Kris Jenner has endorsed everything from toothbrushes and CBD tea to diamonds.

Furthermore, she signed a deal with Fashion Nova shortly after Kim Kardashian turned down a $1 million contract with the brand.

Kris has defied the odds and, despite her age, has become one of the most prominent social media influencers.

Earning From Partnerships and Investments

Kris co-founded KKW Beauty, a cosmetics firm, with her daughter Kim Kardashian in 2017.

The corporation was valued at over $1 billion the previous year. Kris Jenner’s net worth increased by $80 million as she controls 8% of KKW.

Kris Jenner has also teamed up with her other daughter, Kylie Jenner. Consequently, she is a limited partner of Kylie Cosmetics.

Additionally, Kris sold half of Kylie Cosmetics’ stock in 2020, for a total of $30 million. She was alleged to have spent most of the funds on her financial objectives.

Kris Jenner Net worth in Other Currencies

Let’s take a look at Kris Jenner’s net worth in several currencies, along with the BitCoin cryptocurrency.

Kris used to reside in a Calabasas house she bought in December 2017 for $9.9 million.

The residence is right across the street from Kim’s. She sold this house in August 2020 in an off-market deal.

Kris also owns the family’s previous Hidden Hills house, which was featured on “Keeping Up with the Kardashians” several times.

Her son Rob Kardashian and his daughter from a relationship with former stripper Blac Chyna are said to live in this house.

Kris isn’t reluctant to splash out on high-end vehicles, including limited-edition grand tourers. Kris Jenner was the first owner of a new $330,000 Rolls-Royce in North America.

Similarly, Kris Jenner is a proud owner of Range Rover Vogue, Rolls Royce Ghost, and Mercedes Maybach S600, worth a little over $1.5 million.

The affluent woman had a reputation in Beverly Hills for being a lady who partied all night and slept all day.

Her expenditures are roughly equal to her extravagant lifestyle. She spends money on luxury clothes, shoes, and other items.

According to estimates, she spent more than a million dollars on plastic surgery alone.

Jenner has been married twice throughout her life. But both of her marriages did not work out.

She is the mother of six starlet children and grandmother of nine adorable grandchildren.

Raising six children from two separate marriages is never easy, but Kris Jenner has always done her best as a wife and a mother.

She adores her children and never misses an opportunity to lavishly shower them with gifts, parties, and gateway plans.

Kris Jenner has been in a relationship with Corey Gamble since 2014. The couple has been photographed together in public on several events. Kris frequently posts photos of Corey on Instagram.

Kris and Corey often travel to different places for holidays. Their favorite destinations are Italy, Capri, France, Rome, Greece, and others.

The glamorous woman also has a golden heart. She is very active in a variety of philanthropic endeavors.

She founded an organization called We Advance with Mario Bello.

The elite woman also collaborates with her starlet children in different charitable endeavors.

Kris visited Haiti after the earthquake in 2010 with her daughter Kim. They contributed medical supplies to clinics and helped various orphanages.

Kris garnered fame from appearing in Keeping Up with the Kardashian TV show.

The program focuses on the drama of having a combined celebrity family with many kids of similar ages.

It also focuses on the Kardashian and Jenner children’s business ventures and personal lives.

The show began on October 14, 2007. It has entered the list of one of America’s longest-running reality television shows.

On December 31, 2021, it was revealed that Jenner and her family would appear in The Kardashians, a new Hulu series. It is scheduled to premiere in late 2022.

Even before she appeared on the show Keeping Up with the Kardashians, she managed the careers of her daughters Kim, Kourtney, Khloe, Kendall, and Kylie.

Moreover, she is active in administering her other daughters’ and sons’ businesses.

Jenner and her eldest daughter, Kourtney Kardashian, started a children’s boutique in 2004. The shop was called “Smooch,” which ran for nearly six years before shutting down in 2009.

Jenner also collaborated with QVC to create her apparel brand, Kris Jenner Kollection, in 2011. Jenner had previously worked with QVC in the 1990s, selling Gymwears.

She also has a customized bathrobe with the word “momager” embroidered on the back.

Kris is also quite interested in writing and keeping journals. She has gone a step further by publishing her books.

The book recounts her friendship with Nicole Brown Simpson, the murder trial of O. J. Simpson, and her family tales.

Additionally, in October 2014, she released her first cookbook, titled In the Kitchen with Kris: A Kollection of Kardashian-Jenner Family Favorites.

Jenner also gains a sizable amount of fortune through the royalties of her books.

Kris Jenner has cemented her position as the most admired and influential woman in the entertainment world.

She is such an inspirational figure that she has set a good example for all women.

Despite being the epitome of class, glamour, and courage, Kris had a humble beginning.

She has had a troubled upbringing, ups and downs in her life, and a lot of hardship.

Even though she hasn’t received any awards or accolades, Kris Jenner has garnered worldwide admiration and love.

Kris chose to keep Jenner instead of her maiden name out of respect for her daughters, Kendall and Kylie.

Kris’s ex-husband Robert Kardashian kept journals and diaries. When his widow Ellen Pearson began selling bits and bobs to the press, Kris sued her, claiming the diary belonged to his children, not his widow.

Why did Kris Jenner give Kendal the middle name Nicole?

Kris and Robert were good friends with O.J. Simpson and Nicole Brown Simpson. Nicole murder brought Kris heartbreak, and she was pregnant with Kendall throughout the trial. So she ended up giving Kendall the middle name “Nicole” in honor of her friend. 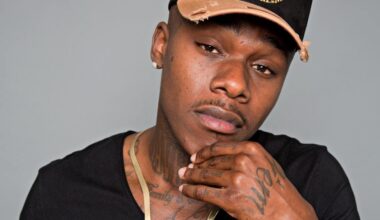 Read More
An American rapper, singer, and songwriter, DaBaby has a net worth of $5 million as of . DaBaby…
NNet Worth
The legendary swimmer Michael Phelps, who holds an unreal 28 Olympic Medal Collection, has an outstanding net worth…