One of the most recognized faces in Hollywood, Pamela Anderson’s net worth is $20 million.

Pam garnered international fame for her role as C.J. Parker on the series Baywatch, which further cemented her status as a sex symbol.

The iconic lady came to the limelight in 1989 with her first cover for Playboy magazine.

Anderson was born in Ladysmith of British Columbia on July 1, 1967.

Pam got press coverage right after her birth on the 100th anniversary of Canada’s official founding via the Constitution Act 1867 as a Centennial Baby. However, she was not the first baby to be born that day.

Between the ages of seven and twelve, she was an acrobat and gymnast and was an athlete during her high school.

Let’s take a brief look at details of stunning Pamela Anderson, and learn some facts about her that you may not know.

Pamela Anderson | Net Worth and Income

As of August 2022 hottie, Pamela Anderson’s net worth is a staggering $20 million.

The gorgeous has lady garnered most of her wealth from TV shows and movies.

However, her income was not only limited to the direct entertainment industry.

The signature show of the hot blonde Baywatch bagged her $300,000 per episode.

She often appeared on the cover of the world-famous men’s magazine Playboy.

This not only made her a definitive sex icon but also gave her a big brand value.

Anderson also made an appearance on a Big Boss-4 which is reality TV on Sony Entertainment of India.

Her beauty and sex appeal are actually worth millions, and all she has earned from Baywatch is totally justifiable.

Hee’s what Pamela Anderson net worth looks like in different currencies, including cryptocurrency Bitcoin

The ‘Baywatch’ goddess has a wonderful luxury pad on Malibu beach.

It’s a three-bedroom eco-friendly home designed by a team of dedicated designers and architects who were inspired by Frank Lloyd Wright.

Anderson put it on the market in 2013 for $7.75 million. She decided to rent the house after failing to locate a buyer.

Pamela has left her Malibu house and relocated to Vancouver, where she was born, and is living a peaceful life.

The blonde beauty is obsessed with luxurious automobiles.

People who own Range Rover rarely sell them. However, Pam decided to sell her car for a charitable cause.

She stated that she will personally hand over the keys to whoever pays at least $50,000, with all proceeds going to Sean Penn’s Haiti Relief Fund.

Additionally, Pamela drives around in a Maserati Quattroporte, which is her third luxury car.

One of the most iconic personalities, Pamela Anderson’s net worth is a massive $20 million as of August 2022.

Our gorgeous lady went through serious trauma during her childhood days, and she has mentioned some of them in her books too.

Well coming from the traumatic and chaotic background and living a successful life like Pamela Anderson is a serious motivation for many youngsters out there.

This beauty is completely devoted to her life.

Pam is very selective about her appearance and spends lavishly on her accessories and clothing.

She has a wardrobe with over 56 exclusive brands.

Just 11 days after burying him with tears in her eyes, she got herself a new Golden Retriever, JoJo.

Despite being officially divorced, Pamela Anderson was spotted in Mexico with her ex-husband Tommy Lee of ‘Motley Crew’ and their two sons, Brandon Lee and Dylan Lee.

The attractive model was sunbathing on the beach in a skimpy white swimsuit.

Pamela Anderson still flaunts her bikini and swimsuit looks on the Hawaiian beaches 20 years after her stunning appearance in the iconic series ‘Baywatch.’

Anderson is an animal rights activist.

In the late 1990s, she was stripped naked for a PETA (People for the Ethical Treatment of Animals) advertisement and served on the organization’s board.

Anderson also served as a director of The International Sea Shepherd Conservation Society.

Anderson has stated that she will donate all her money to the foundation after covering her basic needs.

Read About 17 Most Beautiful Korean Actresses

The success and admiration she garnered from her appearance at Playboy led her to Los Angeles, California, in 1990.

She made her movie debut with Snapdragon and appeared on Raw Justice the next year.

In 1996, she appeared in the hit movies like Naked Souls and Barb Wire.

Interestingly, she won an award for Worst New Star at Razzie Award.

Additionally, she was also appeared in The Institute in 2017, and most importantly, Baywatch.

Moreover, the angelic woman also appeared in Die with Me: A Mickey Spillane’s Mike Hammer Mystery, released in 1994, Pauly Shore Is Dead in 2003, and Scary Movie 3 in 2003.

In April 1997, she became the host of the television show Saturday Night Live.

Similarly, she starred in the animated series Stripperella, created by Stan Lee.

Anderson made an appearance in Sacha Baron Cohen’s spoof documentary Borat: Cultural Learnings of America for the Benefit of Kazakhstan in 2006.

Moreover, she went on to star across several TV shows, including Dancing With The Stars.

Anderson was also seen on Big Boss, India’s version of Big Brother, in the fourth season. For her three days in the house, she received $550,000.

Pamela Anderson was really a hottie during her active days.

Her massive popularity was enough to bargain numerous endorsement deals.

Anderson signed a partnership with Labatt’s beer, which led to other advertising deals.

Moreover, she has also made a significant deal with Pizza Hut and Crazy Domains.

Deal with Alexis Vogel was one of the major sources of income for Pamela during her modeling career.

Pamela was also named the brand ambassador for BamPoker, which began operations in 2012.

The Facebook app features exciting game play and the opportunity to play Texas Hold’em poker with Pamela Anderson herself.

Pamela Anderson has appeared in several magazines over the years.

Besides the Playboy model, her achievement also includes being ranked 11th in Sci-Sexy Fi’s 50 by Femme Fatale Magazine.

In addition, she was ranked 17th out of 102 in Stuff Magazine’s list of the sexiest women.

Anderson has also dipped her feet into writing.

She has written four autobiographies and two novels, which received global admiration.

She also released a collection of her poetry in 2005.

These book releases elevated Baywatch angel to new levels of fame and success.

Anderson’s sentiments have been included in the 2011 book “Paul Ricoeur: Honoring and Continuing the Work.”

In 2015 she released “Connect and Transform Simple Everyday Changes for Spectacular Health,” which she co-authored with John Pierre.

Furthermore, she published the most admired books “Raw” in 2015 and “Lust for Love: Rekindling Intimacy and Passion in Your Relationship” in 2018.

Anderson earned her bachelor’s degree in 1985 and moved to Vancouver in 1998 to work as a gym trainer while pursuing a modeling career.

She began to consider becoming a Playboy model around this period.

Eventually, Playboy reached her, and she appeared on the magazine’s cover in October 1989, initiating her career.

Pamela Anderson managed to steal the limelight and million of hearts in 1989 with her first cover for Playboy magazine.

It was only the beginning of her career as a Hollywood starlet.

How many times did Pamela Anderson feature in Playboy magazine?

She has appeared in Playboy magazine 14 times which is more than anyone else in the industry.

What is the favorite outfit of Pamela Anderson?

Since their debut in 2005, the ‘J Brand jeans have been a popular choice among celebrities, including Pamela Anderson. She chooses a pair of low-rise, pencil-leg jeans.

What was the full name of Anderson Character in Baywatch?

In short, it was C.J. However, Pamela was able to keep the full name of the character a secret for decades.

The full name was Casey Jean, and it was disclosed only in the Bay Watch movie in 2017. Actually, C.J. sounds a lot cooler, isn’t it?

Read About 30 Hottest Actresses in Hollywood

NNet Worth
As of , , American Youtuber and social media entrepreneur Jake Paul bags a total net worth of…
NNet Worth 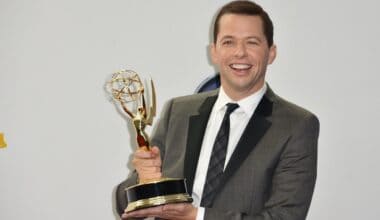 Read More
An American TV and movie actor, Jon Cryer’s net worth is $70 million. Cryer is best known for…