Home R Kelly Net Worth: Lifestyle and Music
NNet Worth

An American singer, songwriter, record producer R Kelly’s net worth is -$2 million as of January 2022.

Because of his contribution toward hip hop and R&B, he has been given the nicknames such as the King of R&B, the King of Pop-Soul.

The singer has won 110 awards including 3 Grammy awards.

In September 2021, he was found guilty of nine sexual assaults, including the sexual exploitation of a child. He has been always surrounded by sexual assault and other similar accusations throughout his career.

It is believed at his peak, R Kelly’s net worth was up to $100 million.

Here are some personal details about R Kelly.

The former R&B King started gaining fame after winning the TV talent show ‘Big Break’ and the $100,000 prize in 1991. The show gave him an opportunity to sign a record deal with Jive Records.

The singer has sold over 75 million albums and had accumulated a large amount of money.

Even though Kelly’s reputation was at risk, his music was not much affected until the movement #MuteRKelly.

It was a movement against Kelly’s financial support and toward Kelly’s conviction. As a result, YouTube deleted his two channels, RKellyTV and RKellyVevo.

After he was proven guilty, things started to get complicated for Kelly as platforms began to band his songs and his record label was terminated. On top of that, he had piles of bills to pay.

In 2020 he revealed he was in $1.9 million debt to US IRS alone. He released a 19-minute song expressing his situation with the allegations and piling bills.

Net Worth of R Kelly in Different Currencies

This is how R Kelly’s net worth looks like in different currencies, including Cryptocurrency BitCoin.

Robert Sylvester Kelly, known as R Kelly’s net worth is -$2 million. He was born on January 8, 1967, to Joanne Kelly and was raised with three half-siblings.

In his autobiography, he has mentioned about sexual abuses he faced as a child.

As a king of R&B, Kelly used to live a glamorous lifestyle.  He has had many romantic affairs and girlfriends.

In 2019 the disgraced artist was almost arrested for throwing a wild birthday party at Chicago nightclub V75.

Amidst the ongoing controversy, the singer was really chilled and instead mocked the situation by singing lines from his song Bump N’ Grind.

Once R Kelly was married to late singer Aaliyah. Their union was very brief as the singer used her false date of birth in the marriage certificate. She was only 15, and Kelly was 12 years senior to her.

Then he married Andrea Lee in 1996. They had three children together, daughter Joann Kelly who is a singer, and sons Robert Kelly Jr and Jay Kelly. Unfortunately, the couple got divorced in 2009.

In a 2018 interview, she opened up about domestic abuse during her marriage with Kelly.

Similarly, Tiffany Hawkins, whom the artist dated, filed a $25,000 lawsuit. The lawsuit was for having a sexual relationship with her despite age-inappropriate. She was only 15 at the time.

Once multi-millionaire, R Kelly’s net worth is -$2 million. During his prime time, he owned multiple properties.

One of his famous properties was his Atlanta home which caught headlines after being accused of captivating women.

It was an 11,455 sq. ft. property with two kitchens, a home theater, a pool, spa, and tennis court. The seven-bedroom house was sold for $1.8 million.

His other beauty on the list, the Chicago mansion, was purchased by a fellow musician Rudolph Isley. He was a former member of the Isley Brothers. He purchased the property for $587,500.

The former King of R&B is a fan of automobiles. He used to have a collection of luxurious automobiles.

The R&B singer used to ride Mercedes Benz E Class. It’s a luxurious car with a powerful engine.  Its current estimated price is about $54,950.

His other ride Maybach 62S is known as a private jet on wheels and is considered the greatest luxury car ever made.

Kelly was called King of R&B for nothing. He has a record of selling over 75 million songs worldwide. He is one of the most successful male artists of the ’90s.

His most popular song, I Believe I Can Fly, peaked on number 2 on Billboard Hot 100.

His other song, Bump N Grind, peaked on number 1 on Billboard HOT R&B Singles for 12 weeks.

Kelly always had an artistic side which he reflected through his music. He was one of the faces of the Alexander Wang collection. The artist was part of the Spring/Summer 2017 digital campaign.

With such fame and popularity, Kelly was featured in different commercials.

He was the face of the 2002 Sounds & Rhythm of Sport Global ad campaign by Reebook. Likewise, he was also in the Beats Studio commercial with Lady Gaga.

The former King of R&B has done some good deeds despite his cruel and horrifying truths. He has released songs multiple times just to donate the revenue to the nonprofit.

Kelly composed the song Sign of a Victory for FIFA World Cup 2010. All the revenue from the song was donated to African charities.

He also donated cases of water bottles to the Flint water crisis. It was a crisis that lasted from 2014 to 2019 in Michigan, United States.

Kelly started by singing on the streets. He got his first break after winning the talent show Big Break and getting signed by Jive records.

He released his first debut album, Born into the ’90s, with Public Announcement (RnB Group). The album was a hit. Unfortunately, Kelly left the group.

Then he released his first solo album, 12 Play, in 1993. The album has super hit songs like Bump N Grind.

He got his other name Prince of Pillowtalk, from his 1995 album R.Kelly. His songs were pop-soul sex. The album became no one on the Billboard 200 chart.

In 1997 Kelly tried a new career, professional basketball. He played for the Atlantic City Seagulls of the USBL. He wore no 12 to honor his album 12 Play.

What is R Kelly known for?

Kelly is known for his gospel-tinged vocals and sexual lyrics. He was known as one the best artist between 1990-2000. Now he’s known as a convicted sex offender.

Who is R Kelly’s Daughter?

R Kelly’s daughter is Jonn Kelly, but she goes by the name Buku Abi. She mentioned R Kelly as her father and called him a monster for his hideous deeds on one Instagram post. 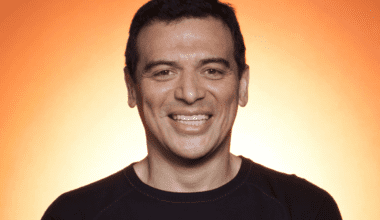 Read More
American comedian and actor Carlos Mencia’s net worth is $20 million. He is widely popular for his show Mind…