A Television reality show star, Rick Harrison net worth is $10 Million as of 2022.

Born to Richard Benjamin Harrison and JoAnne Rhue Harrison on March 22, 1965, in Lexington, North Carolina, United States, the businessman rose to fame as a reality TV star for the series Pawn Stars aired on the History Channel.

Rick and his father in 1989 opened the Gold and Silver Pawnshop featured in the reality show, and both of them were the co-owners of it until his father’s demise in 2018.

Rick Harrison: Net Worth and Income

Being involved as a reality TV star primarily for Pawn Stars and as an owner and a businessman of his Gold and Silver Pawn Shop, Rick Harrison has accumulated a net worth of around $8 to $10 million.

Located at 2556 Red Arrow Drive in Red Rock Country Club in Summerlin, Rick Harrison listed the house on sale around March of 2019 for $3.99 million and was finally sold for $3.15 million in a deal that happened on March 19, 2021.

The house had really cool features, including a Control4 home automation system, security cameras, elevator, resort-style backyard, 11 car garage for his cars, and many more.

Rick also owns a single-family residence in Las Vegas, Nevada, with a total of 3932 square feet of living space. The house has 4 bedrooms, 4 full bathrooms, and 1 half bathroom.

Rick resides with his wife in the northwest valley in Clark County, where he recently bought a property measuring 4500 square feet. He plans on adding 4000 square feet to the existing property for his garage.

He also owns a home in the remote mountains of Oregon, where he spends over 5 months every year during the winter season away from the cameras and spotlight.

As a regular driver of the 2018 Ford F-150 Raptor, which he rates 10 out of 10, he sure has added other valuable cars to his collection over time.

The next car to make its way to Rick’s collection is the 1966 Imperial Crown Convertible, passed down to him from his father, Richard Benjamin Harrison, when he died in 2018. Depending on the car’s condition, the market value can go up to $29,000 at present.

The 1940 Chevrolet Special Deluxe is Rick Harrison’s favorite car that he has back at his home. He has been working on this car for over 12 years, and the work is still in process.

The 1973 Volkswagon Thing was the car he learned to drive in. His mom taught him all about driving with this car. But, the car got damaged beyond repair, so it could not stay with Harrison for long.

But, he always dreamt of getting another Volkswagon Thing, and the History Channel gave him the VW he wanted, and since then, he has it in his collection.

But, the most honorable mention probably goes to his Black Porsche Panamera with its current market price of $200,000.

Rick Harrison’s passion for cars can be easily seen from the great collections he has with him. As per his recent interview, he has 29 cars in his possession.

Rick seems to have a rather lavish lifestyle with a net worth of over $8 million and a huge car collection.

Before selling his Red Rock Country Club Home in early 2021, he and his wife spent over $600,000 renovating the whole house after buying it in 2001.

Being the famous Gold and Silver Pawn Shop owner, he might own other valuable assets but sadly have not been publicized yet.

The more we would like to know about the vacation destinations of the famous TV reality star, Richard Kevin Harrison, the very little has been known about him.

When Rick is off the grid from celebrity life, he likes to go to remote mountains in Oregon, where he owns a house and the entire five months of winter he spends there annually.

He generally favors staying out of the limelight for these five months and lives a rather rugged lifestyle.

He also shared in an interview that he carries a chainsaw in his truck along with him on his journey to the mountain to clear the fallen trees off the path.

Rick has been actively involved in various charity events. In 2014, Rick Harrison became the national Spokesperson and a board member of the Epilepsy Foundation.

In addition, he donated the money made from the sale of the tiara of the former first lady Ida McKinley to the ‘Epilepsy Foundation of Nevada.’

At his father’s funeral, he asked the guests to donate to the Epilepsy Foundation instead of offering the flowers to his dead father. This shows his compassion towards the people who have Epilepsy and his role towards the foundation.

Rick Harrison is also involved in an “Edu-tainment” program for the Clark County School District students, where the students are given a behind-the-scenes tour of the famous Pawn Stars show, all the while learning some of the histories.

Rick’s most notable appearance is in Pawn Stars which is portrayed as a TV reality show by The History Channel, which shows the activities occurring in the Gold and Silver Pawn Shop located in Las Vegas.

Other than that, he and his son appeared as a guest star in an episode of the teen sitcom ‘iCarly’ run by ‘Nickelodeon.’

He also made a guest appearance as an antique store owner in an episode of ‘The Middle,’ a sitcom that aired on the ‘ABC’ network.

In 2013, Rick featured alongside his costars from Pawn Stars in a TV commercial TurboTax tax preparation software.

The same year, he appeared in two other commercials; one for Micro Touch One Safety Razor and the next for Windows Laptop Computers, where he starred alongside his father, Richard Benjamin Harrison.

In 2015, American Aviator Watch cast him for the TV commercial, and he was seen advertising ‘Lifelock’ identity theft protection in 2017.

Albeit being a libertarian, Rick endorsed Marco Rubio’s 2016 presidential campaign. Further endorsement deals have not been reported yet.

Rick Harrison released an autobiography entitled License to Pawn: Deals, Steals and My Life at the Gold & Silver.

The book shares the incredible adventure Rick went through to start the pawnshop in the first place with his father and the ups and downs that have happened ever since.

Before rising to TV fame with the Pawn Stars, Rick had rather mixed life experiences. In 1981, he used to work part-time in his father’s ‘Gold and Silver Coin Shop.’

Five years later, they shifted their shop to Fermont street but sadly lost their lease just after two years.

In 1989, Rick partnered in business with his father and became a Gold and Silver Pawn Shop co-owner in Las Vegas.

Harrison was keen on finding a producer for his reality show involving his pawnshop. He got such an idea for the show after his pawnshop was previously featured on the show ‘Insomniac with Dave Attell’ in 2003.

It took him until 2008 to finally get the production company. Then, finally, ‘Leftfield Pictures,’ in 2008, came with the proposal regarding the show Rick was dreaming of creating, and at last, ‘History Channel’ came forward to air the show.

How many siblings does Rick Harrison have?

Rick Harrison has three siblings, Sherry Joanne Harrison (who died aged 6) and Joseph Kent Harrison are his older siblings, while Rick himself is the older brother to Chris Harrison.

Is Pawn Stars produced by Rick Harrison himself?

Although Rick has produced a few episodes of the reality show, the show’s production is indeed carried out by ‘Leftfield Pictures.’

Who is Rick Harrison currently married to?

Rick is currently married to Deanna Burditt, who is also twice divorced like Rick Harrison himself. The two got engaged in 2012 and later married on July 21, 2013.

Ujwal is a civil engineer by profession and a content writer by passion. He has over 3 years of professional experience as a freelance writer under various niches including Travel Itinerary, Health & Fitness, Celebrities Gossips, and many more. 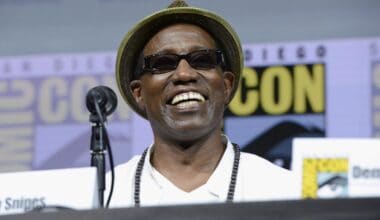 Read More
One of the most well-known actors, Wesley Snipes’s net worth is $10 million. Wesley Snipes is an actor,…
NNet Worth
A Brazilian model, businesswoman, and activist Gisele Bundchen have a total net worth of $400million. She is the…