One of the most admired rockstars, Steven Tyler’s net worth is $150 million.

Steven Tyler is an American songwriter, guitarist, singer, and actor who rose to international prominence as the lead singer of the rock band Aerosmith.

He has also won numerous awards as a vocalist and a spot on Rolling Stone Magazine’s list of the 100 greatest singers.

Steve is known as the “Demon of Screaming” because of his ability to scream in a high and wide vocal range.

Furthermore, the musician is well-known for his acrobatic skill, which he performs on stage.

Let’s explore more about the details of Steven Tyler.

Steven Tyler | Net Worth and Income

The famous American singer and songwriter Steven Tyler is one of the wealthiest celebrities in the world.

He garnered considerable fortunes from his successful music career. This includes earnings from album sales, tours, live appearances, and related merchandise as an Aerosmith member and as a solo artist.

Tyler has also been on television shows such as The Simpsons and Two and a Half Men. He made considerable money from his appearances on these shows.

In addition to these TV projects, he served as a judge on American Idol for two seasons.

His salary from American Idol is rumored to be $10 million every season. This amounts to a total of $20 million for the two seasons.

Even at the age of  74, the musician is still energetic and manages to bounce around the stage in an unbelievable style to reach all his high songs.

So we can safely assume that his net worth will rise even more in the upcoming days.

Let’s look into Steven Tyler’s net worth in different currencies, including Bitcoin.

The musician is also quite famous as an affluent landlord in the United States.

He has acquired a number of properties throughout California. He has rented the homes and is profiting handsomely.

In 2012, the musician paid $4.8 million for his dream house in Hawaii. It is still one of his favorite properties.

Nonetheless, he is currently resides in an opulent mansion in Nashville.

The rockstar has a series of fancy cars that perfectly complement his eccentric lifestyle and personality.

His vehicle collection includes a convertible Jeep and a dune buggy equipped with almost $4,000 speakers and radio equipment.

Tyler paid $1.1 million for a Hennessey Venom GT Spyder in May 2012. It was the fastest street-legal automobile in history at the time, with a top speed of 270 mph.

He also collects classic bikes, including a couple of vintage Harley-Davidson hogs.

In 2006, he partnered with a Harley-Davidson dealer to market the Steven Tyler Signature Series of custom-designed motorcycles.

Likewise, he is the proud owner of Custom Dirico. He loves to ride this beast anytime he goes on a road trip.

He also owns one of the most imitated and pirated automobiles in automotive history, the Lotus Seven, the predecessor of the Caterham Seven.

One of the richest rockstars in the world, Steven Tyler’s net worth is a massive $150 million.

The affluent man leads a very opulent lifestyle. He is a divorcee and is the father of four children.

Steven Tyler appears to be head over heels in love with his girlfriend, Aimee Preston.

The couples are frequently spotted sharing kisses and attending public events together.

Despite their huge age gaps, the couple appears to be madly in love.

Tyler is an adventurer who enjoys going on long bike rides.

Similarly, he considers himself a water baby and is often spotted on beaches of Hawaii. His favorite vacation game is scuba diving on the Great Barrier Reef.

The rockstar is also admired for his generosity and his philanthropic endeavors.

Tyler established “Janie’s Fund” in 2015 to give support, safety, and counselling to female victims of violence.

Since the organization’s establishment, it has raised more than $2.4 million.

Janie’s Fund donated more than a half-million dollars in support of foster youth across the United States.

The motorcyclists have also participated in a number of auctions and charities related to bikes.

Moreover, he frequently donates his million-dollar motorcycles to various charities and charity groups.

Steven Tyler appeared on all of Aerosmith’s studio albums over his long stint with the band.

Over the course of their nearly 50-year active career, Aerosmith has been dubbed America’s Greatest Rock and Roll Band and The Bad Boys From Boston.

Aerosmith’s tremendous success lasted far into the 1990s. They released ‘Get a Grip’ in 1993, which was their most popular album globally, selling 15 million copies.

Among their most well-known tracks from this album include ‘Crazy,’ ‘Cryin,’ ‘Eat the Rich,’ and ‘Livin’ on the Edge.’ This album’s release was followed by a tour of the same name.

The band also played at the Super Bowl XXXV halftime show alongside Britney Spears in 2001.

Aerosmith was honored with induction into the Rock & Roll Hall of Fame the same year.

Steve gained popularity as a result of the band’s epic albums like Rocks and Toys In The Attic.

Besides his Aerosmith songs, Steven Tyler released his debut solo album on July 15, 2016, titled We’re All Somebody From Somewhere.

Tyler has been in a number of films and television shows in addition to his extensive and outstanding musical career.

In 1978, he made his film debut as a member of the Future Villain Band in ‘Sgt. Pepper’s Lonely Hearts Club Band.’

He has appeared in a number of films, including ‘Wayne’s World 2‘, ‘Lizzie McGuire,’ and ‘Be Cool.‘

Tyler has also lent his voice to a number of animated films, including ‘The Polar Express‘ and ‘Epic.’

The musician is best known on television as one of the judges on ‘American Idol.’

Tyler joined the panel of judges for the tenth season of the show in 2011, and he stayed on for two seasons before leaving in 2012.

He has appeared in episodes of ‘The Simpsons,’ ‘Two and a Half Men,’ ‘Saturday Night Live,’ and ‘Nashville.’

Motorcycles are one of Steve Tyler’s main interests, and he has been a motorbike rider for a long time.

He launched a brand of motorbikes that he had created himself in September 2007.

The brand was formerly known as Red Wing Motorcycles before being renamed Dirico Motorcycles.

The bikes were designed by Mark Dirico, hence the name change, and produced by AC Custom Motorcycles.

Aside from his acting and musical endeavors, Tyler also published a memoir, Does the Noise in My Head Bother You? in 2011.

The autobiography narrates the life journey of the iconic rockstar. The memoir was highly admired by his fans and global audience.

Steven Tyler was fascinated by the music industry as a kid. He always aspired to be a musician.

He was a fan of Rolling Stone, and people often thought he resembled Mick Jagger.

He wanted to be in a rock band at the time and had already started creating music, including the future Aerosmith single ‘Dream On.’

Aerosmith was founded in 1970, with Tyler as the lead singer and Hamilton and Perry on bass and guitars, respectively.

The band began by touring the Boston club scene, and their big break came in 1972 when they performed at the famed nightclub ‘Max’s Kansas City.’

They showcased their music to record industry executives at this event, which resulted in them signing a deal with Columbia Records.

Tyler achieved great success in his career, but he started to fade owing to his alcoholic habit. Nonetheless, he is still in business, winning millions of hearts.

Has Steven Tyler ever had any health problems?

Steven Tyler was diagnosed with Morton’s Neuroma. Since the 1970s, the lead vocalist has worn little shoes, and his vigorous stage performances have caused him foot trouble in the past.

Has Tyler gone through any throat surgery?

Tyler underwent throat surgery in 2006 to repair a broken blood vessel in his throat following a concert in Florida. And he has been training hard to regain his voice. He’s singing better than ever.

What is the vocal range of Steven Tyler?

According to many sources, Steven Tyler’s vocal range is C#3-D5. However, he actually hits E6 in the song “Crazy.” The tone is so high that it practically blends in with the guitar, so many people don’t realize it’s his voice.

Read More
One of the popular gamers, Evan Fong, best known as Vanoss’s net worth is $25 million. Vanoss is…
NNet Worth 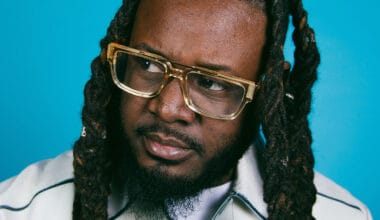