The man, the myth, the silencer, the firefighter known primarily for his dominant presence in the UFC heavyweight division, Stipe Miocic, has a total net worth of $4 million!

Stipe has been a professional MMA player in the UFC for almost 11 years and has an impressive 20 wins, 4 losses, and no draws.

He was somehow always destined to become a fighter since he’d always been good at sports, wrestling in particular.

Because of this particular knack for fighting, he rose quickly after joining the Strong Style MMA training center.

Initially, he entered as a training partner for Dan Bobish, but it didn’t take him long to escalate.

Within just 8 months of training, he’d become a professional fighter, and then after, he won the NAAFS Heavyweight Championship shortly.

He was good at baseball too, but UFC was where his destiny lay.

Since then, he’s taken down A-Listers of the game and managed to rise to the very top.

He’s been going toe-to-toe against Daniel Cormier for a long time now.

As for his most recent fight, he defended his heavyweight title against Francis Ngannou, and unfortunately, he ended up losing the match.

Here are a couple of well-known facts about the skillful athlete:

Stipe Miocic: Net Worth and Income

The infamous miocic, dubbed as “The Baddest Man on the Planet,” has an impressive net worth of $4 million!

A major share of this income comes through his endeavors in the UFC.

Being a former heavyweight champion with an impressive record, it’s only obvious that his major fights bring about a hefty sum of money.

Since his debut in 2011, Stipe Miocic has gathered more than $6 Million from the UFC alone.

This is after including his recent fight with Francis Ngannou.

Stipe’s pockets started getting heavier the moment he beat Fabricio Werdum in UFC 198.

After the match ended, he collected $210,000, and the heavyweight title had his name on it.

Following that, his title match against Alistair Overeem caused a massive uproar, and he ended up with a higher sum of $690,000!

His title fight against Daniel Cormier in August 2019 earned him the biggest paycheck of $830,000 in a single night.

Furthermore, he then received a $50,000 bonus for that night’s performance.

Being a major UFC champion has its own set of perks.

Besides the fame, the hefty sum paid per fight is enough to lead a luxurious lifestyle.

One such resemblance of the luxurious lifestyle is stipe miocic’s captivating house.

The 8,400 square foot mansion spread across a 4-acre land is a thing of beauty!

Fully equipped with 5 bedrooms and 5 bathrooms alongside classy interiors and an outdoor pool with a waterslide, this place is exactly like a house straight out of dreams!

When talking about cars, Stipe is the kind of guy that adores trucks.

He drives around in a full black Dodge Ram Rebel, and well, there’s no doubt that he’d absolutely give this car a solid 15 out of 10!

Before the dodge ram, he used to consider the Chevy Avalanche as his perfect ride.

He had the car for almost 3 years before he just felt like he had to get the Dodge Ram.

Apparently, he wasn’t even planning to get the Ram.

He just saw it at the dealership when his wife was getting a new car.

And, the muscular build, the feel, the interior just drew his attention towards this particular beast immediately!

Something you ought to know, Stipe got his first car right after his UFC debut match. It was a used Chevy Trailblazer.

So, how does the “Baddest Man on the Planet” live his life? Well, to be honest, it a pretty basic yet the most intriguing lifestyle of all.

When stipe is not inside the octagon or out in the field fighting the fire, he prefers to chill out with his friends, coaches, and family members.

Even after post-fights, he prefers being around those people that are close to him. Or, he loves to chill around and give himself time to recover.

“Once I am done fighting, I will relax by my pool, drink lots of wine, eat lots of meats and cheeses and smoke a bunch of cigars.”

He’s more of a “down of the earth” kind of guy, and he enjoys the smaller things in life, like pizza and booze.

Besides that, he often indulges himself in video games as well.

He’s an avid gamer and says that he enjoys playing Resident Evil and Call of Duty when he’s not training.

Stipe Miocic is a novice when it comes to Movies & TV Shows.

He’s appeared in many UFC titled shows, and aside from that, he is known for being a part of “American Violence“ and “Acts of Violence movies.”

He has shown face in the TV series “Billions“ and a special appearance in “Tacoma FD when it comes to TV Shows.”

Apart from that, he has also voiced himself in the video game “EA Sports UFC 4“.

As for endorsements, stipe miocic has a good relationship with a decent number of brands.

One of his most noteworthy partnerships was with Modelo Especial, the official beer partner of the UFC.

This was a personal endorsement, and it took place back in 2018, where he appeared on many digital and social platforms for the brand.

A couple of months later, he added Cub Cadet, a company based out of his hometown, to his growing list of partners.

Alongside this, he has also supported several local companies too.

Other than that, he has also partnered up with Reebok for promotion purposes.

This partnership reportedly ended, paying him $30,000.

You can always recognize a person’s good intention by the way they think of giving back to the community.

Stipe Miocic has been always seen as dedicated to that particular cause.

He has served the people and helped whenever he was called for through his endeavors as a firefighter.

And, it’s not just that; he’s even fought for several causes, including raising money for fallen firefighters!

In April of 2019, Stipe competed in a grappling match against Aaron Howard in the Fight2Win 110 at NEO Sports Plant.

Even though he lost, stipe received much more in terms of respect and gratitude. After the match, Howard commented,

However, he chooses to do so because he cares, just like he did with this event.

He didn’t have to do this. He was trying to raise awareness just to prove he’s an even greater champion.”

After the event concluded, Miocic donated his entire earnings of the match to the National Fallen Firefighters Foundation, a cause supporting part-time firefighters and paramedics.

Talking about his career, most of stipe miocic’s time is taken up by his UFC training and official matches.

Besides that, he’s a part-time firefighter and a paramedic too.

He began his journey as a professional MMA fighter when he joined the Strong Style MMA training center as a sparring partner for Dan Bobish.

After winning 6 fights with knockouts, he quickly escalated in the game.

Furthermore, his heavyweight championship win cemented him as an outstanding player.

His first match was against Joey Beltran, and even though it wasn’t a knockout, he still won and impressed a number of people, including Dana White!

Soon his talents were realized, and after a long struggle, he got a chance at the heavyweight title match against Fabricio Werdum.

A strong right hook was all it took to knock the champion in the very first round.

The title was his, and he looked after it pretty well.

Defending against the monstrous strength of Alistair Overeem Junior Dos Santos and Francis Ngannou almost flawlessly, he proved that he was a fighter to be reckoned with!

Nevertheless, his reign came to an end when he met with Daniel Cormier.

However, there was a controversy rising that dictated Cormier had poked Miocic in the eye and won by unfair means.

Thus, a rematch was scheduled.

Stipe took his revenge in UFC 241 when he knocked out his arch-rival and reclaimed his lost title.

A year later, he again defended his title against the same man in UFC 252 and won too.

Most recently, he defended his title against Francis Nganoou.

Sadly, he could not manage to hold on any longer and was knocked out in the 2nd round, leading to a loss.

Who has Stipe Miocic Lost to?

Stipe Miocic has an astounding record of 20 wins and 4 losses.

These 4 losses were all against different fighters and are against some of the formidable athletes of the sport.

Is Stipe Miocic Still a Firefighter?

Yes, outside the octagon, he’s still a dedicated firefighter.

He has often mentioned that he’s in the firefighting business to help the people in need! 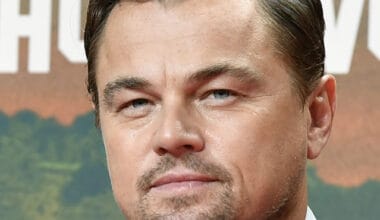 Read More
American actor and film producer Leonardo DiCaprio’s net worth is estimated to be $260 million. He has amassed…
NNet Worth
American Professional Basketball Player and Businessman LeBron Raymone James has an estimated net worth of $500 Million as…