The heartthrob superhero of the current generation and the man who is believed to carry the legacy of Avengers, Tom Holland’s net worth is $18 million.

Tom is most remembered for his portrayal of Peter Parker/Spider-Man in the most recent Spider-Man and Avengers films.

Holland never imagined that he would one day be a part of the Marvel Universe.

We all saw his awesome reaction when he met the superheroes like Ironman, Captain America, and Hulk, for the first time in the movie Spiderman: Homecoming.

It was actually a similar reaction when Tom met these superstars in real life.

Everyone loved Tom’s character in Avengers, and recently when Spiderman: No Way to Home was released, Tom shattered the box office records.

Let’s dig a little deeper into our Peter Parker, aka Tom Holland.

Tom Holland | Net Worth and Income

The superhero Tom Holland’s net worth is a staggering $18 million as of July 2022.

His life flipped once he began working with Marvel.

He was into acting business way before he hit the Spiderman jackpot.

However, he has confessed that his life, fortune, and everything changed after he became Peter Parker.

Holland’s most recent film, “Spider-Man: No Way Home,” smashed box office records, grossing over a billion dollars worldwide and ranking as the third-fastest movie to do so.

Tom earned $250,000 for his short cameo as “Spiderman” in Captain America: Civil War.

Moreover, he received $3 million for his role in “Avengers: Endgame” in 2018. We all know how strong Holland’s presence in Endgame was.

Holland is considered to be on the record of A-list stars. His current basic salary for a single film appearance ranges between $4 and $5 million.

Apart from movies, Holland also endorses big brands, including Audi. These brand endorsements bring tons of money to the superstar.

Let’s have a look at Tom Holland’s net worth in other currency including bitcoin.

Since acclaiming his superstar stature, Holland has owned a number of residences.

He does, however, keep his personal information private and only shares it with his family.

Recently, he moved into a house within shouting distance of his family.

The mansion seems to have the most exquisite interiors and exteriors. The athletic man also has a large golf course where he spends his spare time.

He spent at least $1 million on the mansion.

Despite the fact that he lives close to his family, he has invested in several apartments in England.

Tom owns an Audi RS7 in a sleek grey color and is usually seen driving it. This car is estimated to cost roughly $115,045.

The RS modification appears to turn the A7 from a gentle to a monstrous racing beast.

Furthermore, Tom has an Audi Q7 in his garage as well. The black Audi Q7’s latest edition costs $56,895.

Last but not least, the actor owns an Audi R8, the most expensive automobile in the garage.

In movies, we get to see that the life of Spiderman is adventurous.

Fighting with supervillains, roaming around with superheroes, and swinging from the big and tall buildings in the city, Spiderman just lives the wildest life.

We can see that he is pretty athletic. Tom Holland is also a golf enthusiast.

Both of Tom Holland’s parents were artists of some kind, which is possibly why he wanted to be an artist since he was a child.

He’s a huge fan of the sport. One of the main reasons he enjoys it is that it allows him to be fresh and escape from the outside world.

Tom considers Dwayne Johnson, or The Rock, to be one of his idols. Therefore, he tries to follow The Rock’s lifestyle of fitness.

Tom is currently in a relationship with Zendaya, a co-star from Spiderman.

The lovebirds appear to be in love and are very adorable. They are considered to be the most adored pair on the planet, and they know how to throw massive couple goals.

The couple is frequently seen together on romantic outings and getaways. Recently, their vacation to Santa Barbara made the headlines.

Tom Holland and his brothers established The Brothers Trust to generate donations and bring attention to a charity that might otherwise go unnoticed.

They launched each series of Spiderman officially in England, inviting the general public to bid on tickets to the event. They did all of this through a unique charity online raffle.

Tom Holland gave over £40,000 to a charity that helps children with cancer and their families.

The money was raised through the Brothers Trust’s sale of a limited-edition hoodie for Childhood Cancer Awareness, which began in September of 2021.

He was the first Avenger to surprise kids at the LAC+USC Hospital in Los Angeles with the first of $1 million worth of gifts donated to charity as part of the Marvel: The Universe Unites charity campaign.

Tom Holland suited up as Spider-Man for a visit to Children’s Healthcare of Atlanta, where he met with children and their parents and signed autographs.

Of course, this is standard Marvel charity, similar to what Robert Downey Jr., Chris Pratt, Mark Ruffalo, and others have done in recent years for children’s hospitals.

In 2012, he appeared in the drama film The Impossible.

He was awarded the London Film Critics Circle Award for Young British Performer of the Year in honor of his talents.

He was seen with all of the superheroes in the Avenger’s last movies, Infinity War and Endgame.

His titular role as Spider Man in Marvel Cinematic Universe (MCU) earned him a Guinness Book of World Record for being the youngest actor to do so.

His final moments with Ironman in Infinity War made fans cry in the theatres.

Then, a year later, he was cast as the lead in the Spider-Man: Homecoming film series.

In 2019, he reprised his role as Peter Parker in Spider-Man: Far From Home.

Tom reappeared with the Hollywood blockbuster Spider-Man: No Way Home in 2021, the third film in the Spider-Man series.

He also voiced Ian Lightfoot in the Disney/Pixar animation Onward at the start of 2020.

Holland is now considered an ideal celebrity for people of all ages by every business and industry.

And he’s only getting started with his brand endorsement deals. As his stardom grows, so will his collaborations.

Recently, Tom was approached by Audi for an endorsement deal. And he proved to be the ideal fresh face to enhance sales.

Moreover, the charming heartthrob has also been on the covers of several magazines like Vogue, GQ, and many more.

Being the most popular person in recent days, he is getting a lot of endorsement deals that are certainly increasing his net worth.

One of the most famous faces in Hollywood currently, Tom Holland, has risen to stardom by his dedication to the industry.

Furthermore, he has practiced ballet dancing in his early days. He earned his space in the Marvel universe with his hardworking nature and exceptional talents.

Holland’s enormous success can be attributed to his acting abilities as well as his will to succeed.

Why isn’t Spider-Man on Disney Plus?

Spider-Man films are more difficult to find on streaming platforms than other MCU films. This is because Sony owns the rights to Spider-Man properties rather than Disney.

Does Tom Holland have a tattoo?

Tom wanted to get a spiderman image tattooed on his body, so he got it inked on the bottom of his foot. However, his tattoos got faded, so he had to get them re-done three times.

He considers Iron Man to be one of the best superhero films ever made. And certainly, Robert Downey Jr. is the perfect choice for the part. Well, there is no one who could replace RDJ as Tony Stark. 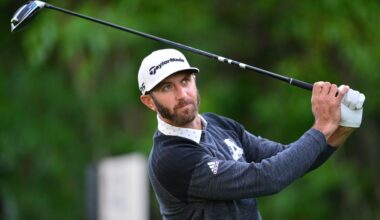 Read More
One of the best golfers and masters of swinging, Dustin Johnson’s net worth is estimated to be $50…
NNet Worth
Congolese-American retired professional basketball player Dikembe Mutombo has a net worth of $75 million. Dikembe Mutombo is one…