Top 10 Wrestlers In The World

If you are a crazy fan of wrestling and eager to know if your favorite wrestler is on the list of top wrestlers, then you should definitely check this one out.

Here, we will explore the top wrestlers in the world.

Top Wrestler Of All Time

All the information included are from trusted sites such as WWE, IMDb, and Wikipedia.

Glenn Thomas Jacobs is widely known under the ring name ‘Kane.’  He started his career in Wrestling on the independent circuit in 1992. After that, in 1995, he joined the World Wrestling Federation ( now, WWE).

Jacobs was presented in a new way as ‘Kane’ as the younger half-brother of Undertaker.

They were famous as the Brothers of Destruction. Fans loved the storylines created by them.

He wore a mask, full-length gloves, and a bodysuit to the ring to follow the storyline.

His first match, Hell in a cell as Undertaker’s brother, was with Shawn Michaels.

In June 1998, Kane defeated the number one Stone Cold Steve Austin in the WWF championship.

He became a three-time World Champion and Third Grand Slam Champion, which was enough to make him one of the best wrestlers ever.

Kurt Steven Angle is one of the best Professional Wrestler players in the WWE, an Olympic gold-medalist.

He was launched in professional wrestling in 1996 with the World Wrestling Federation (now, WWE).

Furthermore, the Wrestler was always passionate, and his skill made him one of the best wrestlers of all time. Even with the broken neck, he won the freestyle wrestling competition at the Olympic game. 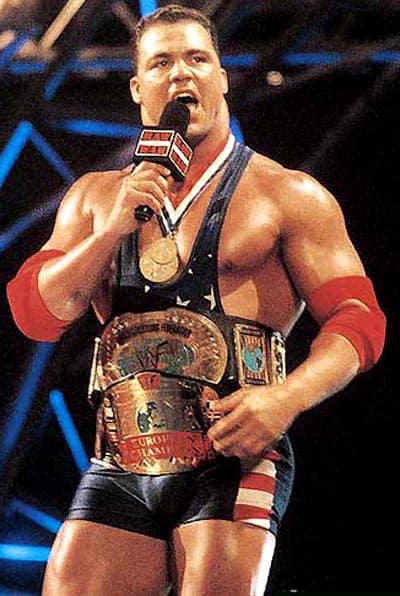 Likewise, he even defeated The Rock at No Mercy. After the victory over Rock, he became one of the first wrestlers to win the Olympic medal and World Championship.

He is the tenth Triple Crown Champion and Fifth Grand Slam Champion in the WWE.

Randal Keith Orton is one of the best professional wrestlers of all time and also an actor. He’s Commonly known as  ‘Randy Orton’ inside the ring.

Similarly, his first WWE match was against Hardcore Holly on SmackDown on April 25, 2000.

In September, he was shifted to the Raw, where he won the match against Stevie Richards.

Likewise, he was awarded the youngest world champion in WWE history at the age f 24.

All this symbolizes that he is one of the best wrestlers of all time.

Adam Copeland is a Professional wrestler under the ring name ‘Edge’ in WWE.  He was launched with WWE in 1996 and made his first televised debut as ‘Edge’ in 1998.

Bryan Lloyd Danielson is one of the top wrestlers in WWE, known as Daniel Bryan inside the ring. He was launched with WWE in 2000 as a professional wrestler.

However, he became popular with fans because of his wrestling technique and ability to develop his own style inside the ring.

Bryan was mainly popular for chanting ‘Yes’ on the ring where all the audience would join him.

One of the greatest wrestlers in WWE who has won various prestigious awards and titles, John Cena made his debut for World Wrestling Federation on October 10, 2000.

However, he lost his first Smackdown match with Mikey Richardson. He won his first World Championship by defeating JBL at Wrestlemania.

In 2007 Cena became the first wrestler to win against Umaga, Samoan, and Bulldozer.

Similarly, he is a 16-time World Champion and favorite of everyone, including children as well as adults.

He made an appearance in almost every WWE Raw, WWE Smackdown, and WWE Live matches.

WWE wrestler also has a rap album, “you can’t see me,” which debuted on Billboard 200 chart.

Michael Shawn Hickenbottom is widely known as the best Professional wrestler of all time.

Famously known as Shawn Michaels, he was launched on October 8, 1984.

Later,  Michaels teamed with Marty Jannetty to form a tag team, The Rockers. The Rockers launched at WWF in 1987.

They were popular among children, adults, and women. After that, Michael adopted the nickname”Heartbreak Kid.”

Mark William Calaway, a professional wrestler widely known as the ‘Undertaker,’ is one of the best wrestlers in the WWE. He was launched in WWE in 1990.

Similarly, In WWF, he became popular as the ‘Death Man’ and also as ‘Brothers of Destruction’ alongside Kane.

However, The Undertaker announced his retirement on November 22, 2020.

Dwayne Douglas Johnson, a professional wrestler and is known as ‘The Rock’ inside the ring.

He made his debut in WWE on Monday Night Raw as a member of Marc Mero’s entourage on November 4, 1996.

Similarly, known as one of the big stars in the WWE with the look of a Champion, his outstanding wrestling skills proved him as the greatest in the wrestling entertainment industry.

Likewise,  he has starred in various blockbuster movies like Fast and Furious 6, Jumanji, Game Plan, and many more.

One of the most victorious Professional Wrestlers of the Attitude Era in WWF, Stone Cold was launched in January 1996.

After he starred as ‘Stone Cold,’ he became popular and also was the’ Poster boy’ of the Era.

Unfortunately, he was forced to retire from the ring due to various knee and neck injuries in 2003.

Apart from wrestling, Steve has also appeared in numerous hit movies such as The Condemned, Grown Ups 2, among others.

Paul Michael Levesque is clearly one of the best professional wrestlers of all time who is known as “Triple-H” in the ring.

However, fans mention him as the best wrestler in the history of wrestling.

Terry Eugene Bollea, one of the best and popular professional Wrestlers in the 1980s, is widely known as ‘Hulk Hogan.’

His popularity became worldwide after signing into the WWE in 1983. After that, he won 12 championships, including 6-times World Championship in WWE.

Hulk Hogan mentioned as one of the best-known wrestlers in the history of wrestling.

If you are interested in Wrestlers and how much they earn, you can go through Richest Wrestler In the World.

The 10 Best Entrepreneur Biographies in 2021

25 Most Expensive Engagement Rings Of All Time

TTop List
15 Inspirational Role Models to Look Up to!!! Role models may vary from person to person, still these…
TTop List
20 Most Expensive Foods in the World Have you ever thought about how expensive foods can be? The…