Robert Woods is an American football player for the Tennesse Titans in the NFL (National Football League).

Does NFL player Robert Woods have kids? The Superbowl champion has a kid with his wife, Alexandra Woods (née Barbee). The couple welcomed a daughter, Shi Demi Woods, on July 19, 2021, at 3:06 pm.

Woods is a doting father to his kid and is proud of being a girl dad. The Titans player has fully embraced fatherhood as he wrote, “God answered our prayers with you Shi. So thankful for the blesser and the blessing.”

Robert Woods Kids With Wife Alexandra Barbee: Does The Couple Have a Kid?

The pair recently threw an Alice in Wonderland-themed birthday party for their kid’s first birthday.

The Tennesse Titans Wide Receiver has lovingly nicknamed his daughter Dottie. Shi celebrated her 1/2 birthday with cakes and balloons on January 20, 2022.

Dottie is already a regular on the sidelines and frequently wears coordinated outfits with her mother to cheer her father.

The footballer’s former team, the Los Angeles Rams, celebrated the birth of his kid, Shi Demi, with a personalized football.

Shi Demi is described as beautiful, smart, sweet, and silly by her mother, Alexandra.

The couple met at a party, where Alexandra initially ignored his advances. Later, mutual friends set them up, and they went on a date the following evening.

In 2017, the former LA Rams star proposed to his wife in Turks & Caicos with a stunning diamond ring.

The star wife wears two wedding bands, as she mentioned, “I wear not one, but two bands because my husband said if he could live twice & do it all over again, he would!”

Alexandra was born Alexandra Shiloh Barbee on November 1, 1993. The mother of one kid is seen supporting her husband from the sidelines and often wears his number on her jersey.

She is proud of Robert’s achievements and shares pictures from NFL events on her Instagram.

The gorgeous star wife is known for her stylish fashion choices. She also owns a lot of designer clothing, shoes, and handbags.

Besides fashion, she also takes her education seriously and recently graduated from W.P Carey School of Business, Arizona State University.

Mrs. Woods has amassed 21k followers on Instagram and has done a few brand partnerships.

The pair spend their holidays and off-season traveling to exotic places. They also love dressing up as different characters every Halloween.

Similar Article: David Montgomery Wife: Is He Married? Family And Parents – Injury And Net Worth

Robert’s father was also a wide receiver and played for the Houston Oilers and Detroit Lions. Unfortunately, Robert II passed away in 2022 at 66, just a few weeks ahead of his son’s second Superbowl appearance.

His father was one of the earliest supporters of his football journey. The player said,” My father showed me the bond that football can build.”

He was raised in California along with his sister, Olivia Woods, who was two years older than him.

Olivia was diagnosed with sarcoma Cancer at the age of 13, and sadly, she succumbed to Cancer in 2007 and passed away when she was 17.

Woods continues to honor her every match by touching the tip of his thumb and index to form a little “O” and pointing it up to the sky to his sister, Olivia.

During a commencement speech at USC, the Titans Receiver remembered his sister’s last words to him that he must be a model as people look up to him.

Robert Woods has an estimated net worth of $30 million.

Likewise, in 2022, he signed his career-best contract worth $65 million with the LA Rams for five years.

This number is only expected to grow after his recent Superbowl win. In 2022, Woods was traded to the Tennesse Titans on his $10 million base salary. With his latest move, Woods is still expected to earn a staggering $65 million over the next 4 years.

The Titans star also earns through partnerships with various brands such as Castrol USA, Head and Shoulders, Verizon, NFL Extra Points, and Lowes.

Following the demise of his sister due to Cancer, the Superbowl champion has been helping people battling Cancer.

Woods and his wife, Alexandra, are looking forward to starting a foundation to help children with Cancer.

Robert’s next game is on September 19, on Monday, at 7:15 pm ET against the Buffalo Bills.

You may also view: 30 Richest NFL Players of all Time 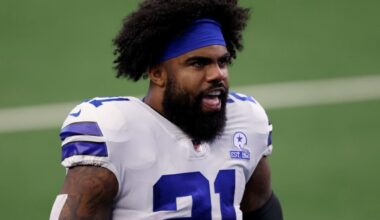 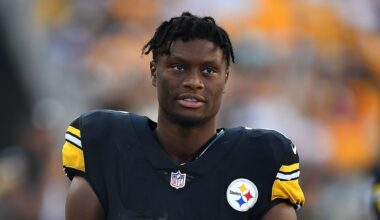 Read More
George Pickens Meme, the boy, became a meme long before he ever played a snap in the NFL,…